About a month ago, Z came inside after dinner and said, "Has anyone seen Fatsykins?" One of our white layer ducks had gone missing (he and E claim to be able to tell them apart). C and I helped him look high and low, roaming through the woods and down to the river and up the driveway, much farther than any of the ducks has ever traveled before, but we could see no sign of Fatsykins. Which was weird, because I had been home all day and hadn't heard any ruckus and the other ducks were as calm as can be, not acting as if they had all nearly avoided a hawk or fox. Z was pretty upset, and when C asked him if he wanted more ducks he said, "No, because they'll just get killed by something." This was our second duck loss in two years (which isn't bad, compared to our chicken fiasco). I didn't want more ducks, either, because they're messy and gross and a pain in the butt if we want to go away for a night or a weekend or a whole summer. But somehow C prevailed and three new little peepers made it to our house this week (did you know that baby ducks peep?). 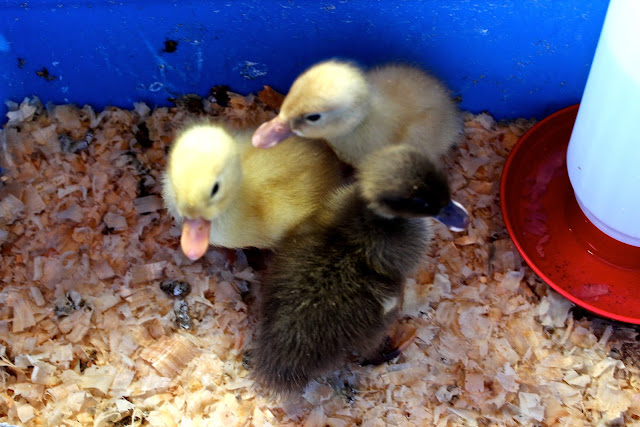 They are, clockwise from left to right: Duck Norris (a giant Pekin), Daffodil (a buff Orpington), and Princess Layah (as in "Layer" with a Maine accent; there was some discussion about whether she should instead be Princess Layer, as in "Leia" with a Maine accent. There is a thing here about taking the R off the end of one word and putting it on the end of another. I, for example, am "Andree-er").

Now that they're here, peeping and making a mess and inconveniencing our weekends, even I have to admit they are pretty darn cute.
Posted by Andrea at 8:23 AM