This might be as close to a PSA as I come with this blog. First, the saga: Saturday evening, I took a walk to the end of our driveway and back, as I often do several times a day. I'd heard some peeping sounds in the birdhouse where swallows make their home, and I made a detour to check out the box, squeezing between a pin oak and an apple tree, both with lots of low leafy branches, on my way there. About halfway home, I felt a stinging sensation on my neck. Assuming the noseeums, which had been out in force earlier in the week, were back at it, I brushed and slapped at the stinging spot, which seemed to move around and grow worse. Back at the house, I started to rub an after-bite stick on the spots that stung, but rather than soothing, the minty ointment intensified the stinging sensation. Then I noticed a small, brown, fuzzy caterpillar on my shoulder. I ran outside, brushed it onto the ground, and smashed it with a rock (I said "I'm sorry" to it as I did so; it should be noted that the caterpillar did not apologize to me). Then I ran in, shouted to C to look up browntail moth, and jumped into the shower, where I attacked the area with soap and water. By the time I got out of the shower, swollen red welts covered my neck and shoulder from sternum to nape. Meanwhile, C found a picture of the browntail moth larva online, and it looked roughly like me attacker, but a quick scan through the literature didn't offer much in the way of treatment advice, so I took a massive dose of Benadryl and another antihistamine we had leftover from one of the kids' rash episodes, and went to bed. 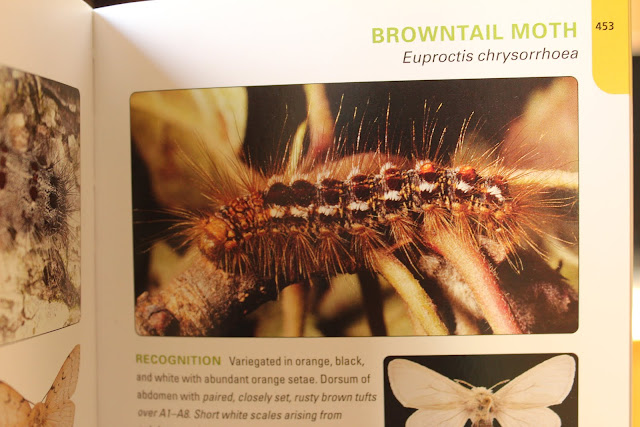 The next day, I posted a picture of my leprous skin on Facebook with a warning that the caterpillars had moved inland. My field guide describes the moths' range as "presently dunes, coastal strand communities, and adjacent woodlands from Maine to Cape Cod." Last I'd heard about the moths, was when M was a baby, 15 years ago, and I was strongly advised against taking him into a state park near the coast. But as advice and consolation came in from friends, I realized that they had invaded much of Central Maine this summer. I also realized there's not much you can do about them. Again with the field guide: "Its short, deciduous setae (or spicules) [i.e., "hairs"], tightly packed into the rusty brown tufts over the dorsum, are highly irritating to most people and produce pronounced dermatological reactions if numbers of them get embedded in the skin." Yeah, no kidding. It's not only close and intimate contact with the caterpillar that's a problem, but the setae can become airborne and get you as you walk around (I believe this happens when they pupate and shed the old skin). They like all woody plants, but prefer apple and cherry trees as well as beech and oak—all of which abound on our property. The thing to do, apparently, is to look for the webs in the winter and early spring, snip them off, and drop them in soapy water. Too late for that this year.

This summer, I have had a neck covered in blackfly bites, an imbedded tick, clusters of bites from noseeums that somehow found their way inside my pajamas, as well as several dozen mosquito bites, and a small patch of poison ivy. Not one of these irritants, however, has deterred me from going outside. After the browntail moth incident, however, not only did I want to stay inside, I was ready to burn down our entire 15 acres. Every time I stepped out, I got goosebumps (which, of course made my rash hurt more, as each hair follicle stood on end, tugging at the stinging, embedded setae) and I cringed away from all vegetation. Over the course of days, however, I started going out, almost as usual (though not stepping off our driveway) and today, I did a visual survey of our pin oak, looking for evidence of brown tailmoth larvae. This is the only caterpillar I found, and I wasn't entirely sure it was the offending specimen (I could have brushed my skin against it as a test, but I'm not that dedicated to science) until I enlarged the photo and saw the two indicative orange dots at the back end (they really weren't that visible at normal size, and they're this caterpillar's most distinctive feature). 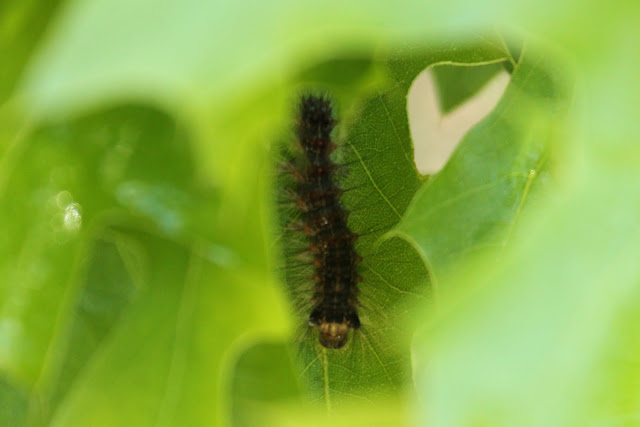 As a PSA, this is not very helpful, since I have no idea what to do about the caterpillars or about going outside without getting a "pronounced dermatological reaction."A Tyvek suit, perhaps? One information sheet recommend long sleeves, long pants, tight collar, hat, polyester fabric (apparently less prone to the setae attaching than cotton). But the whole point of summer is to be able to go outside not suited up for an Arctic expedition! As far as treating the rash, among the various remedies people suggested was scrubbing the affected area with a brush. After reading this, I jumped in the shower, and scoured my neck with an exfoliating face wash and repeated the procedure the next morning. This helped immensely, and when a few more spots sprang up on my wrist, I went at them with a nail brush with the result of almost immediate relief. C, who had a small patch on his lower arm, remarked how satisfying this remedy is, when it's what you most want to do to a rash anyway, but are usually not allowed to do.