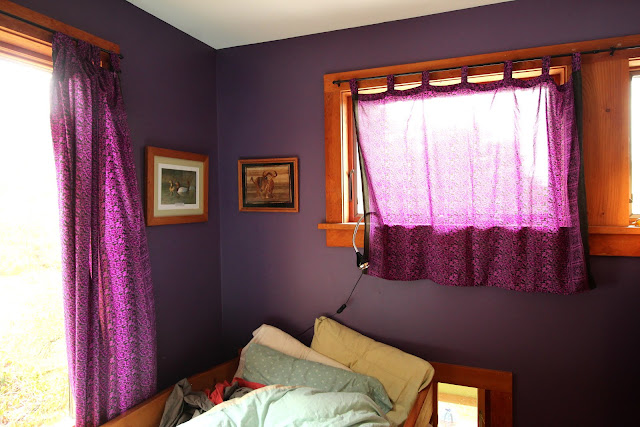 After repainting and cleaning and reorganizing of the boys' room, I had only one small job left to do to finish it—take one long curtain and make it into two short ones for their small south windows. I put this off for a long time because I knew the silky, slippery material would be a pain to work with, and I didn't want to deal with the math of figuring out how much to cut off the bottom in order to leave enough to make tabs and a hem and have both curtains come out the same size. It turned out to be not that bad on either count (although the material is no fun to work with, and I regret having agreed to buying them, but I was worn down by E and Z's total contrariness on the whole curtain issue).

Somehow I only managed to get one curtain in the photo, but I can assure you they're pretty close to being the same length. I also put in curtain rods, replacing the old white ones with red-and-blue car finials. I made the mistake of buying one long rod for these two windows without having actually measured. It was just barely long enough and didn't leave as much of an overhang as the other two curtains have, but I don't suppose anyone but me will ever notice. As I sat perched precariously on the edge of Z's loft bed, taking out the screws on the old curtain rods and putting in the new ones, it occurred to me that in removing the old froggie curtains we were removing the almost the last traces of childhood from this room, and especially the last traces of M, for whom I made the curtains after a long (long, long) trip to the fabric store when he was very little.

The curtain refresh was probably several years too late (although rainbow frogs aren't really all that babyish are they?), but that didn't make the moment any less poignant.
Posted by Andrea at 6:00 AM