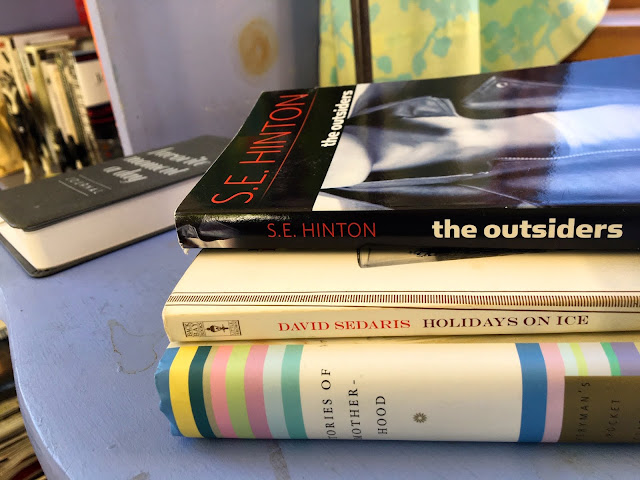 December was a slow reading month, in part because I was still finishing up one of last month's selections, in part because I went back to work, and though I don't read much during the day even when I'm not working I'm just too tired now, what with getting up all kinds of early, to read when I go to bed at night, and in part because my evenings have been taken up by holiday preparations—making and baking (and trying to finish up another round of watching Friends before it goes off Netflix).

But I did get a little bit of reading in. First, I'd picked up an Everyman's Library volume of Stories of Motherhood last month, a book I'm surprised I never ran across when I was in grad school specifically looking for short stories on this topic. Not all of the authors are mothers themselves (some of them are in fact men), and not all of them are written from the mother's point of view (one interesting example by Alice Munroe was from the POV of the daughter, even though most of the book takes place before she was born). I enjoyed it and enjoyed finding a few new authors or new stories by authors I was already familiar with.

Next, every holiday season I must read, at a minimum, "Santaland Diaries" from David Sedaris's Holidays on Ice. I thought I wouldn't have time this year and tried listening to the audio from This American Life while I baked cookies, but though it was very enjoyable, it wasn't the same and I squeezed in a reading in the bathtub later that evening.

Finally, I decided we needed to read The Outsiders as a family this winter break, when I found out that three out of five of us have not read it. I picked it up late the night before the night before Christmas, started reading while I waited for the Christmas stollen to bake and finished this morning. I didn't cry quite as much as I did when I first read it in seventh grade, or even as much as I did about six years ago when I gave it to M and reread it myself, mostly because people kept talking at me during the sad parts. I haven't yet convinced anyone else that they need to read this book, but I haven't given up yet, either.
Posted by Andrea at 12:08 PM