I have a large stack of books in my bedroom--volumes that were lent or gifted to me or that I picked up at used book sales or author events and never gotten around to reading. One of my 20 for 2020 goals is to read 52 of those books this year. When I made that resolution, I imagined that I read around 100 books per year, so that only about half would have to come from that stack. Though I pose books I read for photos and write about them here, I don't count them. One day when I had time to kill in a doctor's office waiting room, I scrolled through my book posts, mentally tabulating the volumes read, and it turns out that last year I read fewer than 50 books, the previous year it was in the 80s, and the year before that I don't know, because I was interrupted mid-count. So, reading 52 books from the stack and other books I want to read is going to be a challenge. 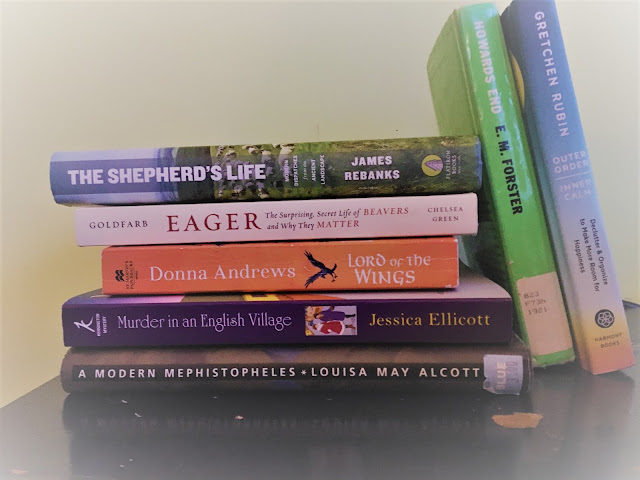 I redefined what counts as a book from the stack to include any book I already owned at the start of 2020 and haven't already read, so books I got for Christmas count, as do books I shelved but never read. I'm off to a good start this month, with nearly five books from the stack read so far. These are:

Murder in a English Village by Jessica Ellicott. I bought this book at a crime writing conference I went to earlier this year, along with another from a different series (under a different name), which I wrote about here. There's a wintery scene on the front cover, so I saved it as a wintery read, and started it on New Year's Day. It turns out weather wasn't a significant enough of a factor to make the time of year essential, but it was a nice, cozy ready for the quiet relaxing days after the holidays. I liked the characters and the set-up for what is clearly a series, as well as the setting of an English village post-WWI. My only complaint is that it was poorly proofread, which is more of a reflection on the publisher than the author, but I found it somewhat distracting.

A Modern Mephistopheles by Louisa May Alcott. I found this book in the thrift store and was intrigued by the dark description of a book by the author of Little Women. I finally pulled it out and read it while preparing to go see the latest film adaptation of that more gentle story. It's a Gothic tale about manipulation, vanity, and innocence. It has a kind of play-like atmosphere, and one can imagine its beginnings in one of Jo's theatrical productions in the garret. Apparently the book was written earlier in Alcott's career, before Little Women, and not published in her name until after she died. I was interested to learn from the introduction that she  suffered from mercury poisoning from her time as a nurse during the Civil War, which is a story I want to learn more about.

Lord of the Wings by Donna Andrews. My mom gave me this book over the summer, and I started it in October, because it's about Halloween. I ended up getting distracted by something else and put it down halfway through. There's a lot going on in Andrews's books--way too many characters and plot points to keep track of. I finally decided to give up on trying to keep track and just go along for the ride. If you like an entertaining, cozy, and somewhat ridiculous mystery, this one's for you.

Eager: The Surprising Secret Life of Beavers and Why they Matter by Ben Goldfarb. This book is the current selection for my naturalist book club, and I arranged for my kids to give it to me for Christmas. It's a fascinating look at beavers as essential elements of our ecosystems, the history of their near-decimation, and the people working to protect them today and encourage their dispersal back into damaged landscapes. You get to know some interesting characters along the way (Beaver Believers) and a few beavers as well. I have renewed admiration for these giant rodents.

The Shepherd's Life by James Rebanks. This book has been on my shelves a long while. I pulled it out after seeing a coworker was reading another book about sheep. It's the memoir of a young-ish (about my age; for some reason I was expecting a wizened old man) shepherd in the Lake District of Northern England, telling the story his life growing up on the farm and the history of ancient sheep breeds and sheep herding practices that have been handed down through time and how the modern world devalues work like farming. I like the way it's written, in short vignettes and antidotes that move back and forth in time, sometimes within a single paragraph. I'm about 3/4 of the way through the book, and it's interesting to me that not one mention has so far been made of spinning, knitting, weaving, or anything to do with fiber other than selling it (or burning it when the prices are low). Is that because it's written by a man, or because fiber arts aren't part of the tradition of his family or the region as a whole?

I also read two books not from the stack this month:

Howard's End by EM Forster. Not sure why I never read this book before, when I'm a fan of Passage to India and A Room with a View, but it took a PBS dramatization of it to get me going. After the first episode, I picked it up at the library and read it all before episode 2 (luckily there was a three-day-weekend in there). And I loved it. It's full of astute observations about human nature and the class system, the characters are charming, and every twist of the plot was a surprise. I also added a new word to my vocabulary: ramshackly, which pretty much describes my whole life.

Outer Order, Inner Calm by Gretchen Rubin. I have a love-hate relationship with Gretchen Rubin books, mainly owing to a blind spot that I think a lot of "self-improvement" authors have, which is that not everyone's life lends itself as well to happiness or time management or self-care as those of people who are literally getting paid to make themselves happy, manage their time, or take care of themselves by writing books on these topics. However, I responded to an uncontrollable urge to buy this book, right around the time I was clearing out the jar room. There's nothing in it that I didn't already know, but it was still helpful to read it and focus my thoughts on decluttering. I like her three-tiered list of questions to go through when deciding to get rid of something: Do I use it? Do I need it? Do I love it? I also like that she doesn't go for a one-size-fits-all approach. If you're comfortable with clutter, then don't declutter. We don't all have to live like monks.

What's in your book stack this month?
Posted by Andrea at 8:46 AM