Month two of my 2020 book challenge—to read 50 books from the stack by my bed (and other unread volumes already in the house). Last month here: January. 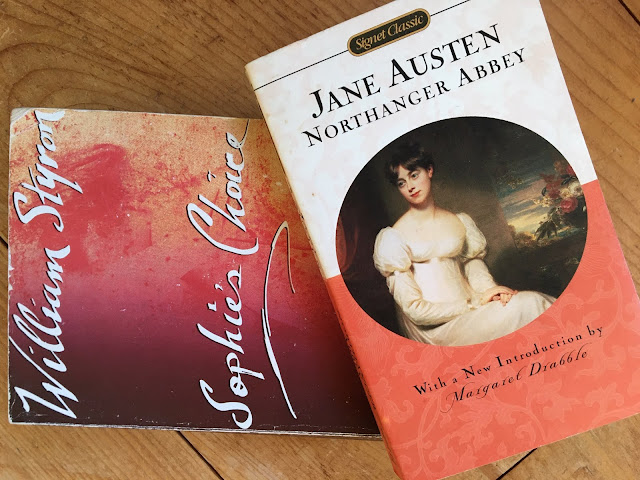 I only read one book out of my stack last month, because it was long and fairly intense, Sophie's Choice by William Styron. I inherited this book from a friend who moved away years ago, and I knew nothing about it, except that it's among the canon of books everyone should read, and that whatever Sophie's Choice is, it's not a happy one. It's the very gripping tale of a woman in Nazi-occupied Poland and, later, Auschwitz, told through a young man who meets her a few years later in the apartment building where they both live. It was so good I didn't want to put it down, but sometimes the story got so intense that I had to put it down and cleanse my brain with some dumb comedic TV. My only complaints: I'm a little bit sketptical that a person's response to trauma would be to basically become a sex addict (Styron's wishful thinking?), and I found Sophie's actual choice, when the book finally gets to that point, to be a little anitclimatic. Not that it isn't terrible—because it is—but that part of the narrative felt a little rushed. Overall, however, a brilliant story and one that's important to read at this time, with the fascists taking over government and actual Nazis marching in our streets.

As an antidote to such an intense and tragic story, I needed to read something light and comforting and very low-stakes, so I turned to my go-to comfort writer, Jane Austen, who I like to read in the winter anyway. It's been years since I read Northanger Abbey, and an ironic gothic tale was exactly what I needed. It did not disappont. Fun and funny and thoroughly entertaining. It does not, however, count as a book stack book because, even though I already own it, I've read it before, so it doesn't help me toward my goal of reading all the unread books.
Posted by Andrea at 9:57 AM