After I finished remodeling the dollhouse kitchen, my friend Libby commented that it was a "very Andrea kitchen." The living room on the other hand, is not very me, covered with pink rose-patterned wallpaper. But I didn't want to replace the wallpaper--it's in pretty good shape, and it has sentimental value (it is very my grandma), and even though it's nothing I would ever dream of living with in my house, I like it. In fact, I decided to lean in on the late 70s / early 80s Hollie Hobby, Little House on the Prairie, Jessica McClintock aesthetic and go full-on "olden days" revival.

I replaced the carpet (which had been originally magenta, and then dark green in the early 2000s remodel) with a deep rose color. The felt-covered couch and chair that my grandparents made had gotten moth-eaten in our basement over the last several years, so I had to reupholster, which was a lot more challenging than it looks (maybe because I was doing it at the kitchen table while my family was cooking Thanksgiving dinner all around me). I stuck with the original colors of green and yellow, and for both the furniture and the carpet, I used bamboo felt, hopefully not delicious to moths but with a nicer look and feel than acrylic. 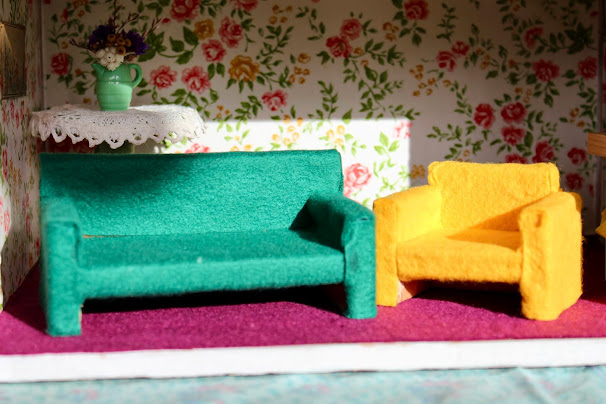 None of the other original living room furniture survived to today, so C helped me make some new pieces. A coffee table, complete with a National Geographic magazine (with actual readable articles inside) and a bird book I made with a kestrel postage stamp and cutouts of birds from a bird seed bag (every house must have a bird field guide). 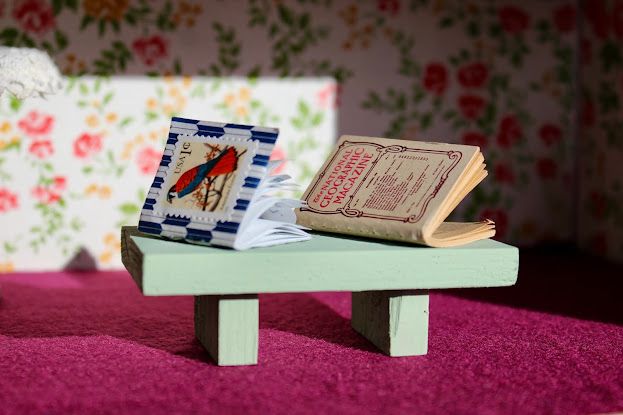 One of those tall, spindly tables that people used to put potted ferns on but that would never survive in my house. I made it from a wooded spool that the heavy-duty thread I sew outdoor gear from comes on and a circle of wood C cut for me. On top, a lace coaster I had lying around and a little jug of blossoms snipped from a dried flower arrangement. 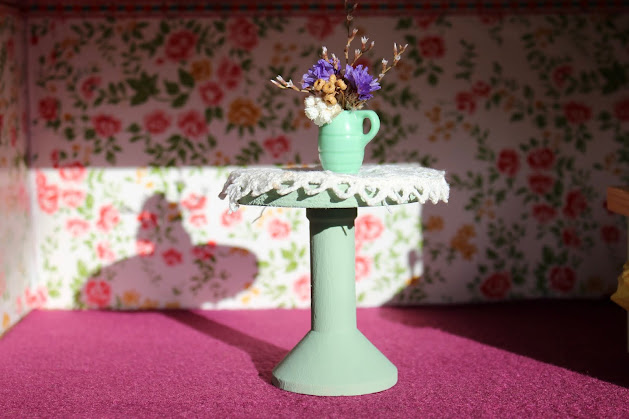 The original house did not have a fireplace. We lived in the suburbs and my grandparents had left woodturning behind on their respective farms decades earlier. But now that the house is in Maine, it needed a fireplace, mostly because a mantel is a handy place to display things. A friend of mine gave me a baggie of miniatures she had collected over the years but didn't want anymore. Among them were the Nat Geo mag from above, this tiny photo frame for which I made teeny silhouettes, and a mini bud vase. The original paper rose had faded with time, so I made a fresh bud from crepe paper. The candles are beeswax birthday candles and the logs are oak. 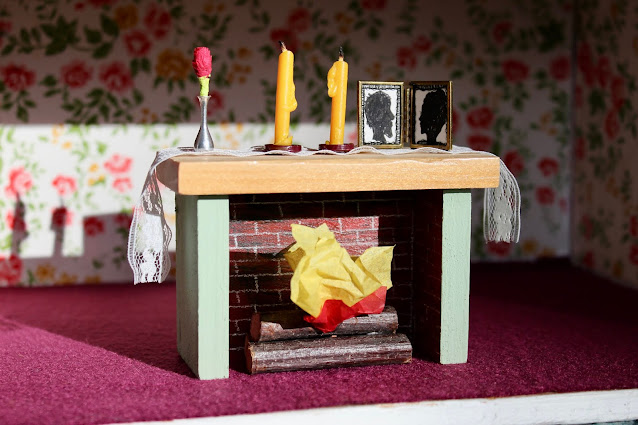 I said in my previous post that I was going to use handmade/found-around-the-house items to decorate the house. But then I remembered The Rambling Rose. When I was little, the local mall, Cinderella City, boasted all the best of malls in the their heyday: escalators, fountains, Christmas trees two stories high, rising into the vaulted ceilings. A below-ground level called Cinder Alley was designed to look like a small town Main Street, with sidewalks and a black-painted "street," each storefront made to look like actual buildings. (The irony of the role of the mall in round-one, pre-Walmart decimation of actual Main Streets was lost on six-year-old me.) My favorite store in Cinder Alley was called The Rambling Rose. I don't know what its primary merchandise was--only a dim vision of  a tumult of ribbon and lace and chintz. But I do remember the jewelry case with shelves that revolved vertically, each one crowded not with diamond rings but with dollhouse miniatures. I could stand and watch those shelves cascade for hours. But I never never bought--or was given--a miniature from the case. Maybe I never asked. Maybe my parents figured that I'd lose or break it within minutes (they would not have been wrong). But whatever it was, I had almost no realistic dollhouse items, and I figure, why not indulge that inner little girl now?
So for the living room, I bought this tiny frame, painted it gold and made a tiny watercolor from a photo I took on the Colorado Trail. It's fancy like the living room, but also very me. 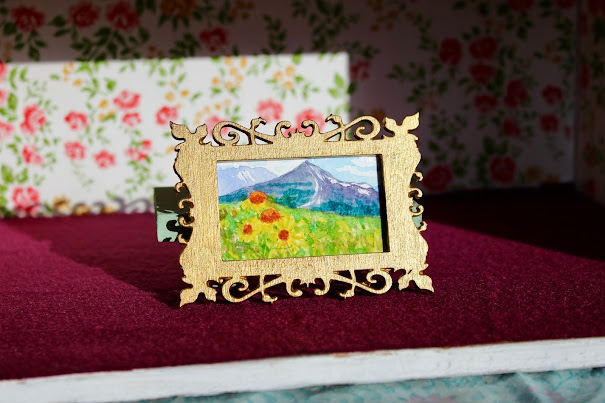 I also bought two framed botanical prints to hang over the mantel--also a little Victorian and a little me. 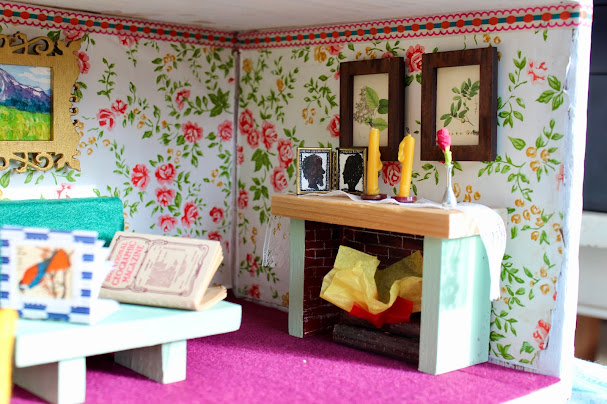 The new art complements the original art, a print of wildflowers just barely visible on the side wall. 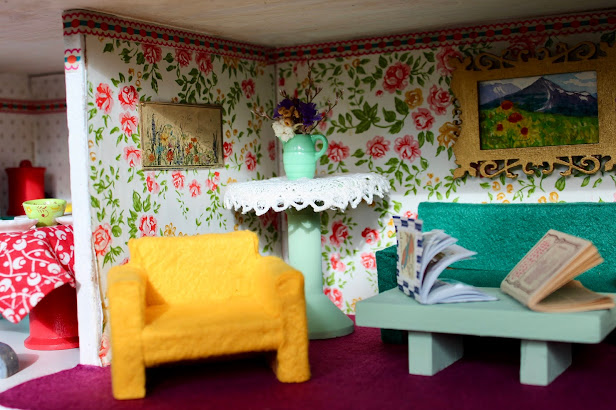 And finally, the finishing touches: an afghan for the couch, so you can snuggle up and read the magazine by the fire, a little dachshund, for my friend Lisa who needed a dog in the house before she could move in, and a teeny rotary phone, which is one of the only real miniatures that I had as a kid (an antique store purchase probably), with the cord and receiver long gone.
After: 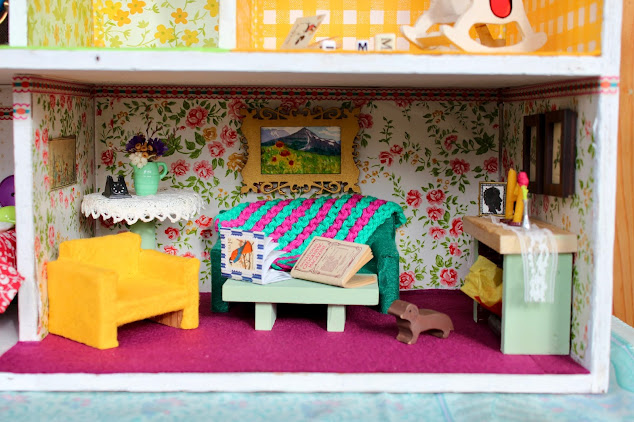 Don't you want to move in there?
Posted by Andrea at 8:08 AM