This quilt began as a package of vaguely S-shaped charms my mom sent me several years ago as part of a de-stashing effort. I never got around to finishing it because: a) I didn't have enough charms for a whole quilt; b) I didn't have the original pattern piece to make new ones out of (nor nearly enough stash); and c) I had no idea how to sew wavy lines and get the resulting fabric to lie flat. 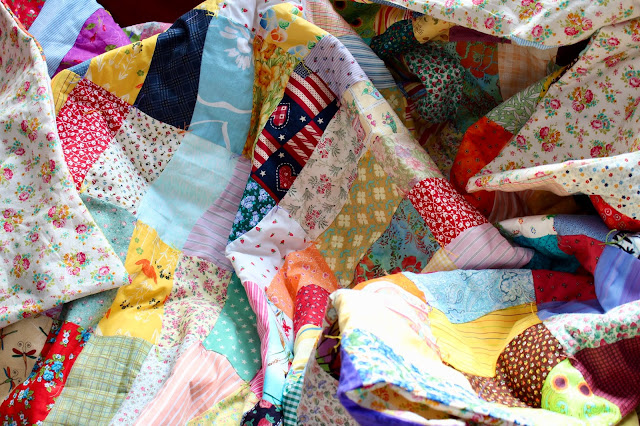 I decided to just let all that go and dive in. I made a pattern from one of the pieces my mom sent--this is a good way to introduce error, and indeed the new pieces I cut ended up longer than the others, but like the guys of the buildings and grounds crew where I worked the summer after I graduated from college used to say whenever someone started to get uptight about the imperfection of a small project, "It's not a f-ing piano." I'm not sure if I sewed the curved edges "properly," but I just kind of stretched and molded one piece to fit another and, when the two pieces were being recalcitrant, by using the occasional pin.

For the backing, I went with a romantic rose print, which I thought fit with the calicos on the front. I didn't like it at first and wished I'd gone with something more simple and monochromatic, since the front is so busy, but it's growing on me. Like the 70s quilt, I used fluffy batting and tied the corners, old-school style. 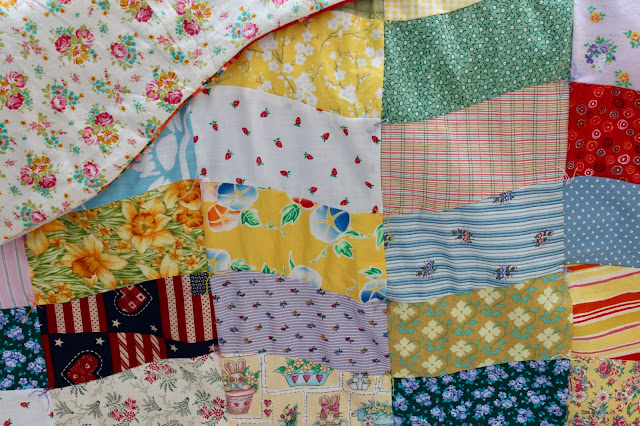 Even though almost no two of these prints would go together in any rational way, they kind of work as a big kaleidoscope of color.
Posted by Andrea at 7:19 AM