Most of our furniture is junk--either other people's castoffs or purchases from the unfinished pine shop. I believe I've referred to our aesthetic in these pages as "early '90s college student." All we're lacking is a cinder-block-and-board bookcase. I really believed that some day we'd graduate to grownup furniture, but that hasn't happened yet. In the meantime, I thought I'd give a little refresh to a few scraggly looking pieces in my bedroom, using chalk paint, a new medium for me and one I liked the sounds of (no prep work!).
1. The bookcase. An unfinished pine piece originally bought to house kids' toys in the living room. It has since served stints in my room, the kids' room, and then back to my room. When I first bought it, I slapped a coat of interior house paint on it (I think this is the periwinkle of the mudroom) and made back panels of foam core covered in fabric because the back is literally just four narrow slats of wood. 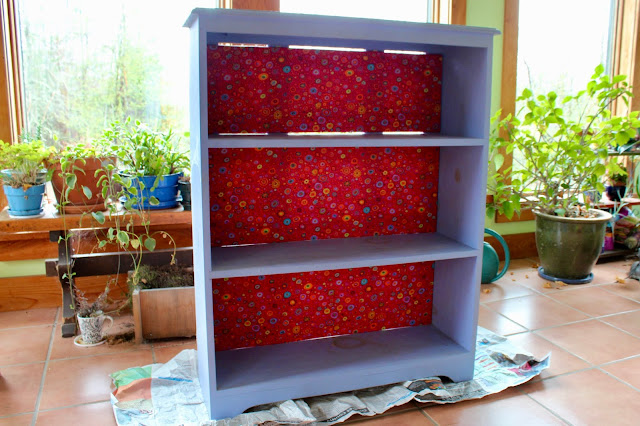 Anyhow, it was due for a new coat of paint--the knots in the cheap pine were showing through the inappropriate paint and it was dented and dinged from years of use. The paint I bought the paint was from Chalk It Up, and it was a dream to work with--easy to apply, great coverage, easy to clean up. The chalk color I picked for the bookshelf is called "blackberry," and it's a bit more magenta than I imaged it would be. I was afraid it would clash with the red fabric panels, and it kind of does, but I think I like it. 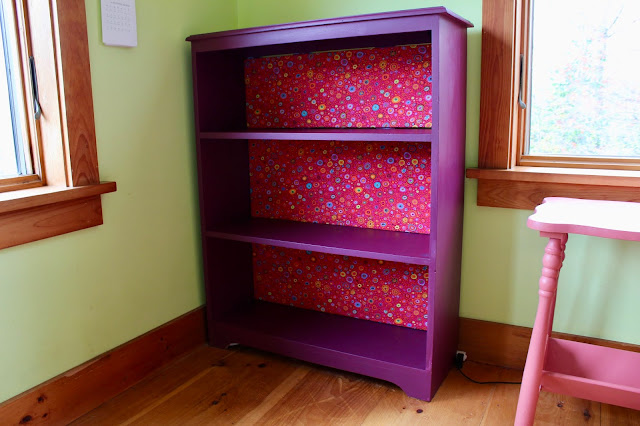 2. The nightstand. This little end table came from one of C's relatives houses when they were moving. It was a badly finished ugly brown when it came to us, but I liked the spooled legs, the book storage area... 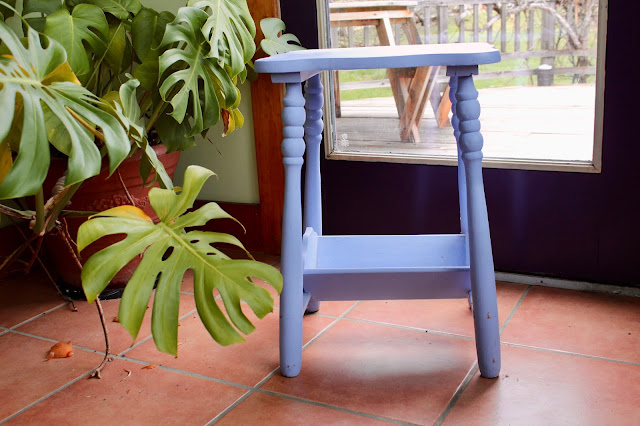 ...and the groovy scalloped top. So, again, I slapped a coat on of paint (possibly the bathroom lavender?) and called it good. 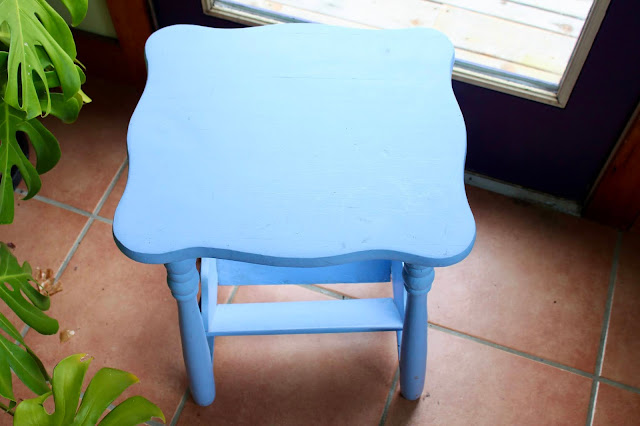 It wasn't in too bad of shape all these years later, considering it was basically recovered trash, but I was ready for a change and went with "clay pot" for the paint color. 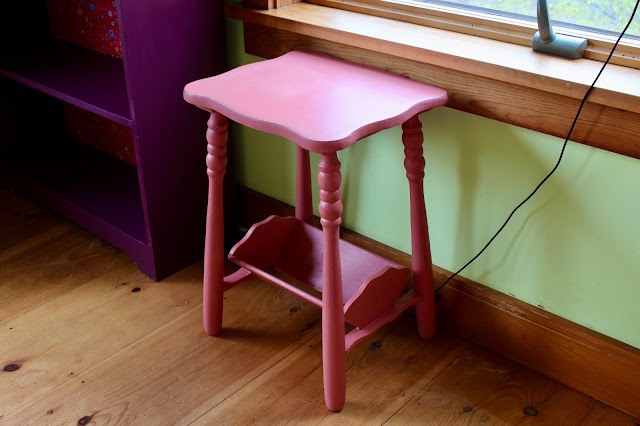 I've never been a pinky-pink girl, but for some reason this salmony color is emerging as a theme in my bedroom makeover (see quilt top and stay tuned for curtains). I think it's a reaction to the testosterone overload caused by being cooped up in the house with four men/manchildren for the last year. 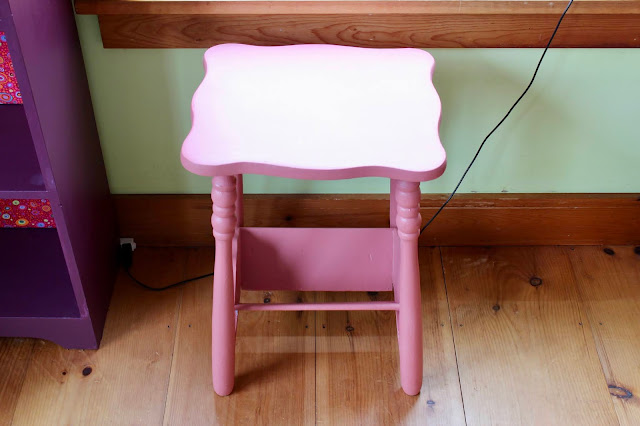 3. Mirror. This item I think C actually did dumpster dive for, or maybe picked up on the side of the road. It's cute, and handy, but the wooden base was painted an anemic yellow of  peeling (probably lead-based) paint. (I forgot to take a before picture.) The purple is much nicer, and in addition to a fresh coat of paint, I gave the glass a good cleaning, so now I can actually see myself in it. 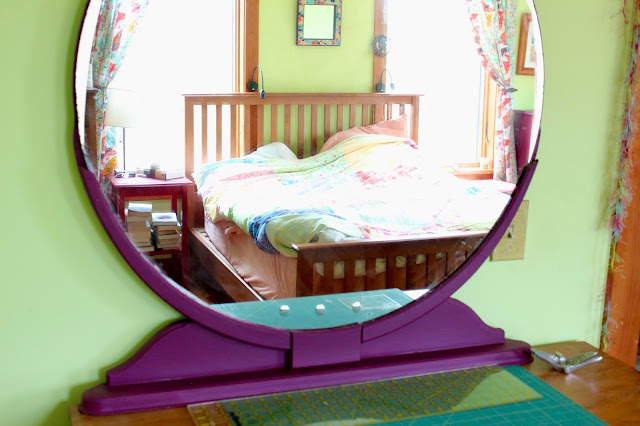 Clay paint requires finishing with a wax coating. I found some at the craft store that goes on with a brush and is water-based and very easy to use. After the wax dries overnight it just needs a light buffing and then a week to cure, after which I put my books back on the shelves. These are my writing resource and current project books. I used to have them arranged by color (much to C's bemusement), but the sun has bleached the spines so much that the books aren't that colorful anymore. Maybe I should reorder them some other way...size perhaps (to continue to annoy and perplex the spouse, whose books I should mention are in the order of archaeological dig, with the most recent reads on top and a lot of in-situ dust)? 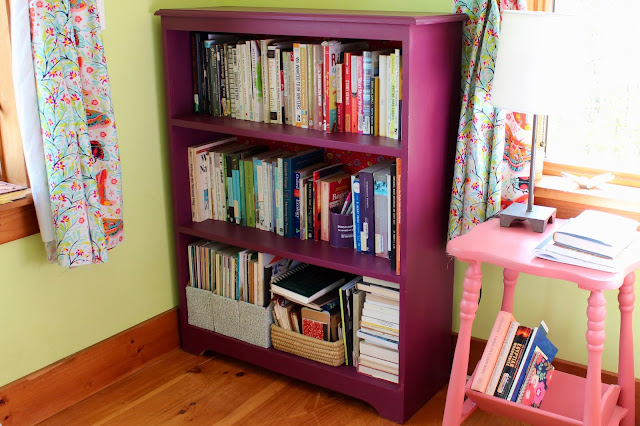 I have a box leftover of stuff that was cluttering up the top and fronts of the shelves. Not sure what I'll do with all that, but I kind of like this clean, minimalist look, and instead of books and papers and stuff taking up the top surface, wouldn't it be nice to have nice things, like an orchid and some sort of object d'art? And then there's the question of those babies--do I keep them or replace them with some fun art? 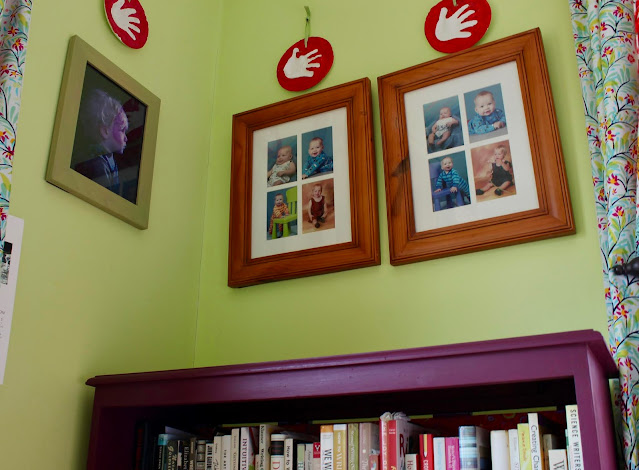