A monthly post about my progress toward finishing a very large stack of books. Past months' posts:
January 2021
February 2021
March 2021 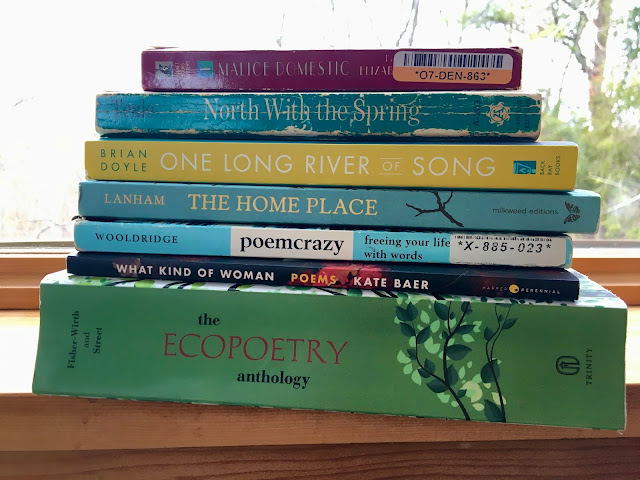 I redeemed myself in April after a couple of months of very short book stacks. Admittedly, a couple of these were nearly done before the month began, but still, I'll call it a win.

The Ecopoetry Anthology, Ann Fisher-Wirth and Laura-Gray Street, eds. I bought this book on a whim because it was facing out on an eye-level shelf the first time I went into a bookstore after the lockdown started, way back in August, on my birthday (which is why browsing in bookstores is so much better than buying online; how else would these serendipitous finds take place?). At an average of one poet per day, I finished all 576 pages exactly eight months and two days later, on Earth Day, fittingly. About 1/4 of the poems are historical, the other 3/4 contemporary, which was a nice mix I thought. Overall, it's just a stunning collection with an expansive notion of "eco." My sister asked if any poems in particular stood out, and while it's hard to choose, here are a few that I found memorable:  The Hurricane Katrina poems by Patricia  Smith ("5 p.m., Tuesday August 23, 2005" "Man on the TV Say," "Won't Be But a Minute," "8 a.m., Sunday, August 28, 2005") are heartrending. "The Stars" by Eliot Weinberger was inspirational. W.S. Merwing "For a Coming Extinction." Lucille Clifton "The Killing of Trees." And really I'd recommend everything in the collection except for a small few that left me scratching my head.

What Kind of Woman, Kate Baer. A very different kind of poetry collection, about womanhood and motherhood and wifehood, about the expectations society places on all of the above. I'm looking forward to reading Baer's forthcoming collection of erasure poems.

Poemcrazy: Freeing Your Life with Words by Susan Goldsmith Woodridge. Not an actual book of poetry, but a book about writing and enjoying and living poetry. I've owned this one a long time but only ever got through a couple of chapters. I decided to write a poem (or do a poetry exercise) every day through April, and used this book as a guide for some of those poems, and just read it for enjoyment otherwise, finally making it to the end. It's a delicious invitation to play with words.

North with the Spring by Edwin Way Teale. I started reading this two years ago and set it aside when spring ended and summer began. I somehow forgot to pick it up last year, but I resumed this year, and I really enjoyed the quiet, gentle account of a ramble from south to north following the flush of spring over the land.

The Home Place: Memoirs of a Colored Man's Love Affair with Nature by J. Drew Lanham. This is a lovely and moving account of family, place, nature, and race and growing up on a farm in South Carolina and challenges of being a birdwatcher, a biologist and a Black man.

One Long River of Song: Notes on Wonder by Brian Doyle. This is another book that jumped off the shelf at me. I'd always enjoyed Brian Doyle's essays when they appeared in Orion or The Sun, but I hadn't picked up one of his books before. The short essays and prose poems here were collected by writer and editor friends after Doyle's death from a brain tumor. Each one is incandescent with joy, love, and humor, even those that were clearly written as he knew he was dying.

Malice Domestic, edited by Elizabeth Peters. I came to this book in the nerdiest way possible: listening to a podcast about the original source of apples (somewhere in Kazakhstan), I heard that the Latin for apple is Malus domestica, and it rung a bell in my head--I knew there was a mystery novel or something similar out there by the name Malice Domestic and I thought I must read the book with such a clever play on words. Turns out it's an annual conference and anthology of short stories, originally started by my mystery goddess Elizabeth Peters. This one, edited by said goddess, is the first of the collection, published way back in 1992, and was highly entertaining. I think short works--both stories and essays--are a good fit for me right now, mentally, especially fun short stories, like those in this collection.

What are you reading these days?

P.S. If you receive these posts via email, the service that makes that happen, Feedburner, is going away at the end of July. You can subscribe to my newsletter here, or you can visit my blog site here to stay in touch.