I finished knitting my new hat last weekend at camp. It's the Noro Spiral One Skein Hat from Heavenly Socks Yarns in Belfast. I had started it in the Portland Airport on our way to Colorado, after spending a good 15 minutes trying to remember how to cast on (I both considered asking a woman who was knitting nearby and calling my mom). Then I finally moved the yarn from my right hand to my left and voila! my fingers knew what to do (gotta love muscle memory!) 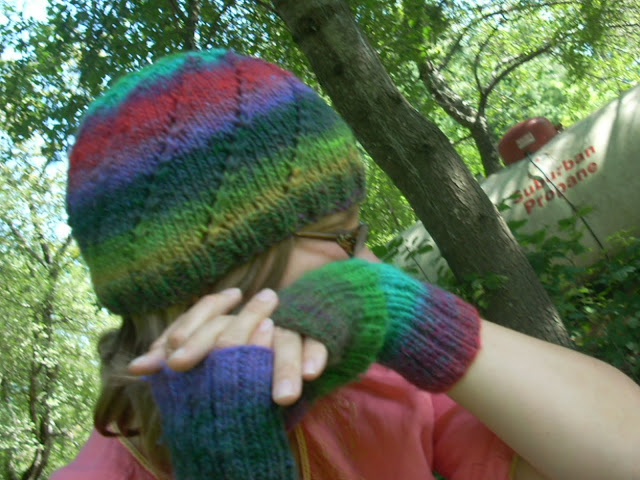 (E was my photographer)

I finished the ribbing on the flight, but needed my mom to show me how to yarn over (I did not take with either of my trusty but very big and heavy knitting books). By the time we got home, I had knitted up to the purple, but I had gotten lost a few times and my spirals weren't exactly spiraling, so I tore it all out! All the way back to the ribbing, then tied little loops of red yarn from a giant skein of old Red Heart that I picked up somewhere along the way, and used them as stitch markers at every yarn over. What a difference! I've always been too lazy to use stitch markers, but they are truly brilliant. Once I got going, the hat fairly flew along, and is really easy once you know what yarn over means, and if you use stitch markers. The stitch three togethers near the end was a bit of murder on my thumbs and elbow (once I remembered to switch to five needles that got a little better too.)

For some reason, the hat reminds me of ice cream--rainbow sherbet all swirled up, MMM! 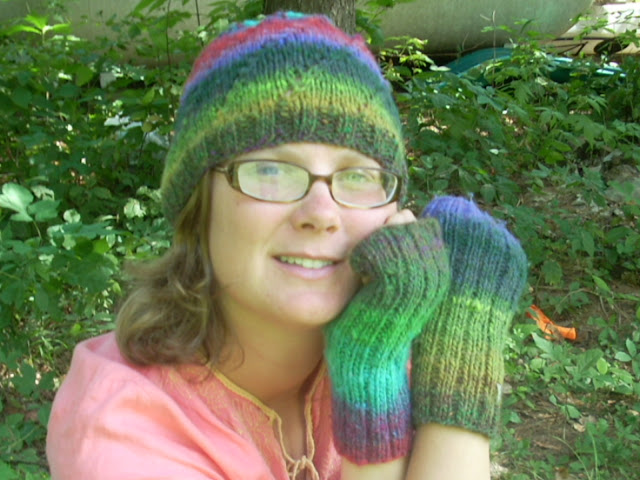 The Maine Morning Mitts I knitted last fall (starting them at camp on Labor day weekend, with cast-on assistance from Granny Clo), also from a single skein of Noro, which makes them look almost like they don't match. I have a quite unreasonable affinity for fingerless gloves/mittens, so I love these a lot, although I often wear them with my rain coat, which has Velcro at the cuffs, so they're getting a little fuzzy.

I just calculated that I learned how to knit 13 years ago, but in that time I have only made 1.25 scarves, six hats, three pairs of mittens and a gnome. Granted, I made three of the hats and one pair of mittens in the last year, so at least my productivity is increasing, but think of all that wasted time in between! Some of that was consumed by baby-making, but I think of those months spent prone on the couch, waiting for the twins' birth--I could have been knitting between naps.

I've decided to always have a project going, ready for long car rides or movie/TV watching. I picked up needles on our way home from camp (where else--Heavenly Socks), for yarn I bought in Colorado (which I thought, after I bought it, was the wrong yarn, so I bought some more different yarn, which I thought was right, but it turned out the first yarn was the right yarn after all, so I'm glad I didn't return it).
Posted by Andrea at 8:27 AM