What We've Been Up To

It's been a few weeks since I've been in this space because my computer was threatening to never start up again if I didn't deal with its storage issues. I found lots of ways of avoiding doing so until this past weekend when I finally took every free minute to edit and upload photos online and then copy them to a memory stick and then delete them (which is a scary thing to do, even when you have two backups). I managed to only get through about four months' worth (of 2012!!), but it was enough to free up some space. My plan is to do a month or two ever week until I catch up to now. Of course, catching up with photo management has been on my new year's resolution list for the last three years at least, so we'll see how far I get.

In the meantime, we've been doing our best to get into the holiday spirit. On Thanksgiving, we had our traditional fruit parfait breakfast. 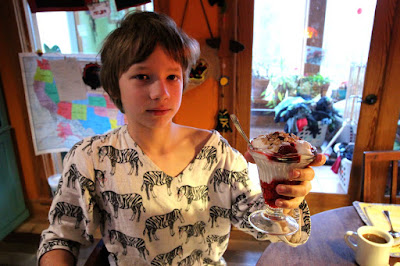 And then Z, M, and I made some corn husk dolls for our table. 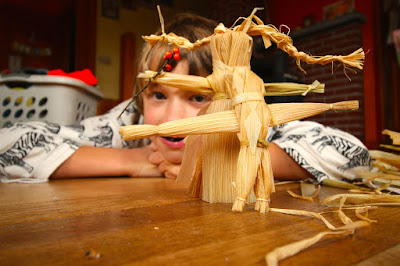 And I made a pear frangipane tart from this cookbook. Oh, my goodness, I don't do a lot of fancy cooking these days, but this was divine and so worth the effort. 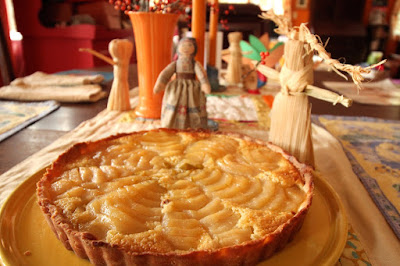 The day after Thanksgiving, Z, E, and I drew self portraits. I took a few drawing classes last month and this was one of our homework assignments and it was super fun to do with the kids, even though they had no interest in following the steps in the lesson 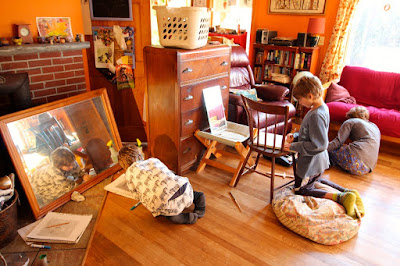 Or maybe that's what made it fun--their own unique take on it. 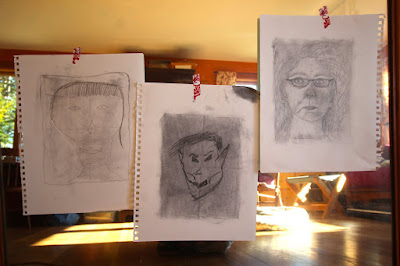 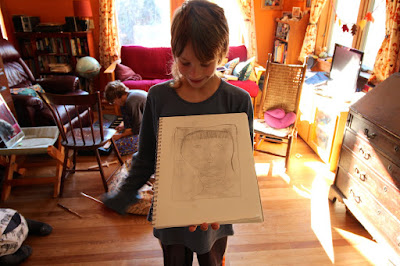 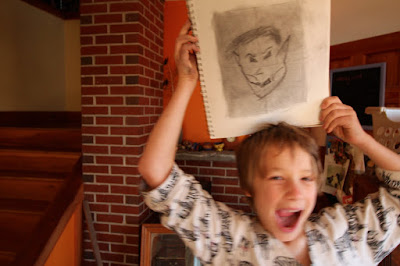 And then, all of a sudden, it was December. Last Monday evening I was sitting on the top step, putting the first Christmas book in a bag for our book advent calendar (aka CBC or Christmas Book Countdown) when Z walked by on his way to bed. He asked if I was putting all of the books in bags that night. "Not tonight; I'm too tired." I said. "I'm just doing the first book." He laughed and I asked, "Do you still want to do it this year?" "Yes! It's a tradition!" I thought maybe they were getting too old to want to hear Christmas picture books, but I guess not, especially not Z, who is particularly attached to traditions and doing things the same way year after year.

We decided to put off getting our Christmas tree one more week--it really wasn't tree-getting weather, C was busy with a project, and I had a workshop to prepare for and teach Sunday. Instead we did the prep work--dusting and decluttering and vacuuming behind furniture so the living room will be all ready for the tree next weekend. We also went out in the woods to take photos for out Christmas cards, which is always a challenge. This is one of the better shots. 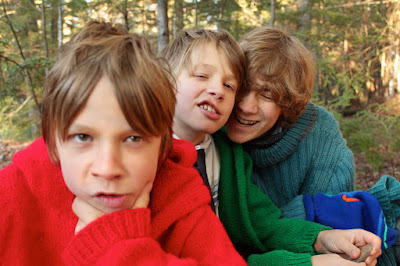 The gnomes were supposed to be ornaments (I like to give them ornaments on St. Nicholas Day so they hang on the tree all season), but St. Nicholas never got around to attaching hangers to their gnomey hats. 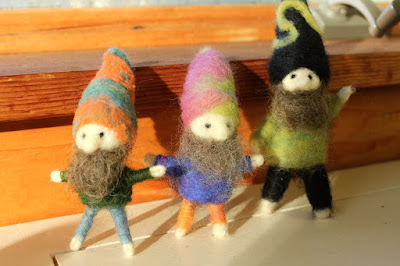 And we even squeezed making a batch of cookies in Sunday evening. I mixed the dough when I got home from my workshop and then E, Z, and M took turns cutting and decorating them with colored sugar in between their showers that evening. While we were making the cookies I remembered how when they were little, baking a batch of cookies was an all day event, with pulling out the play tower, and finding aprons, and making sure they took exact turns with the measuring and mixing and cutting. I thought that even though there are things about those cute little ages I miss, there are some nice compensations, like everything doesn't have to be a big production all the time. I put the cut cookies out on the deck to chill and went to work uploading and copying and deleting one last batch of photos. 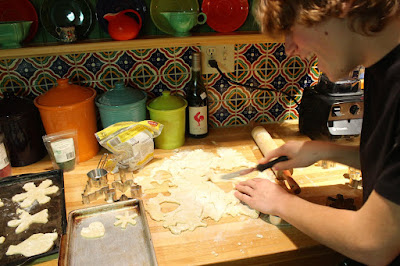 When I got into bed at about 10:30 I was feeling very satisfied with myself for having accomplished everything I planned that weekend, and then I remembered...the cookies were still on the deck. So some things are easier nowadays with older kids, but sometimes I still have mommy brain.
Posted by Andrea at 7:06 PM