So, fellow progressives, stop thinking about suicide or moving abroad.

Want to feel better? Eat a sour grape, then do something immediately, now, today. Figure out what you can do to help rescue the country---join something, send a little money to some group, call somewhere and offer to volunteer, find a politician you like at the local level and start helping him or her to move up. Think about how you can lend a hand to the amazing myriad efforts that will promptly break out to help the country recover from what it has done to itself. Now is the time. Don't mourn, organize.
~ Molly Ivins, November 2004

This weekend, E and I organized the shit out of two corners of our rooms. (Just so you know, I'll be cursing like a sailor for the foreseeable future.)

E has been nesting pretty heavily, which is a thing kids do now and then, when they share their room with two brothers, trying to carve out some space for themselves. His results were a bit tidier than what had been there before, but still fairly cluttery and not entirely satisfactory. So we decided to switch his bookcase… 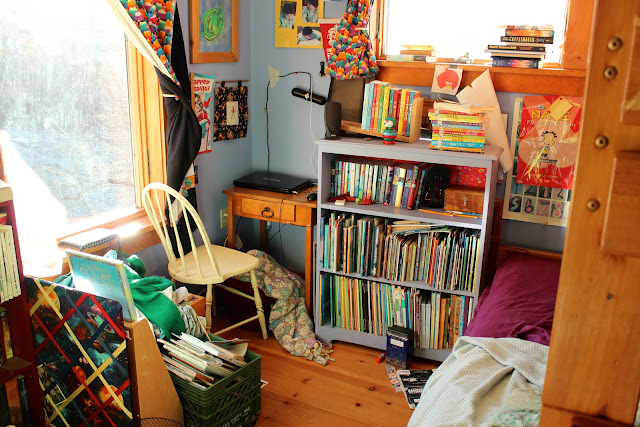 
Along the way, we needed to do some tidying up of their closet to make room for all the books being evicted.

To help us along, I put on some kids' CDs that we haven't listened to since the boys discovered Weird Al. I cried a little when Jack Johnson sang, "I can change the world with my own two hands." I don't know if I was crying because I still believe that's true, or because I no longer do.

Here's the after shot of E's new corner. Better, no? 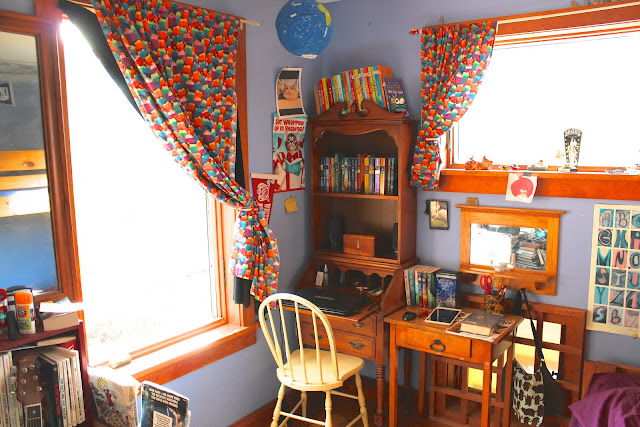 Their closet still suffers from too many boys with too much stuff in too little space syndrome, but at least the dust has been vacuumed out (from one side) and look at all those books! We can just bunker up at home and read for the next four years. 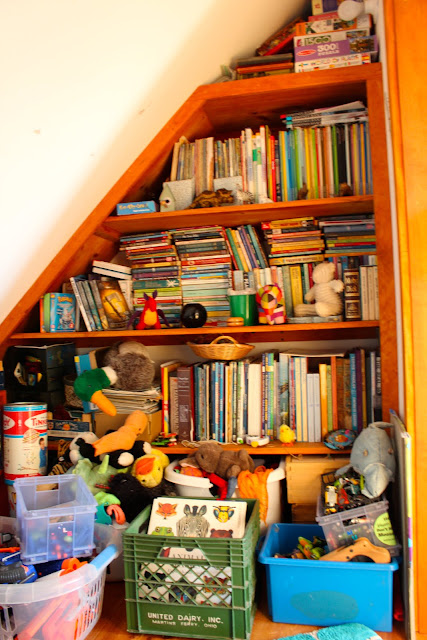 And here's my new corner. A little more breathing space. But still a little clutter; that big pile to the right is drafts/works in progress/class notes/etc. One cold day this winter I'll go through it and recycle at least half of it. 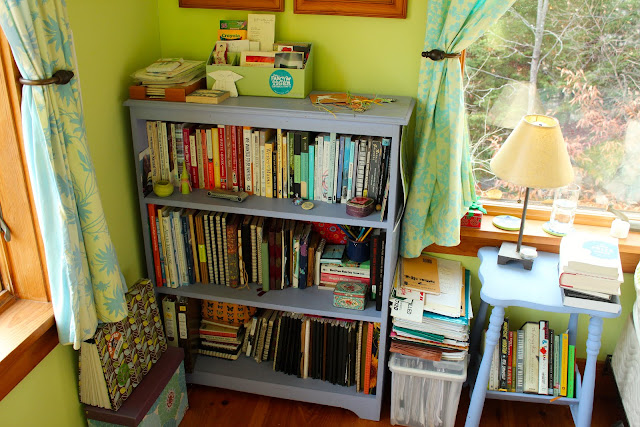 The top shelf holds my writing books. I don't refer to them too much these days, but it's comforting having them there. 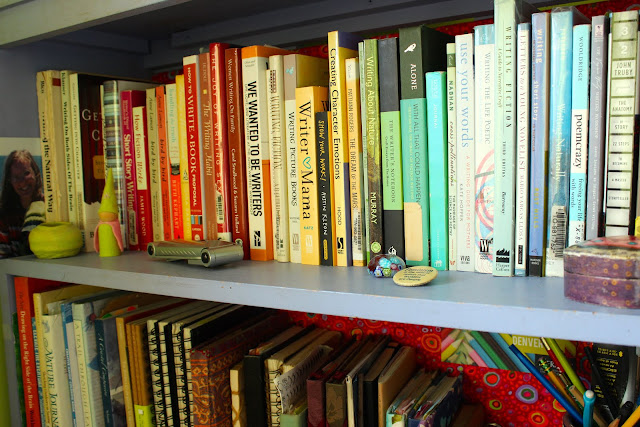 The next shelf down holds my thesis (!!!), a few reference books, and my nature journals. And on the bottom shelf, my journals, going back at least to college, and some notebooks with things like our wedding plans, and plans for our first CT hike. I read once that it takes writing a million words to become a good writer. Do you think there are a million words in all those journals? Nah, probably not. Along the way, I found some things I needed. I didn't know I needed them, or even remember I had them, but they were good finds. In a sleeve of bumper stickers there was this, which seems apt right now. I'm not much of a bumper sticker person, but I think I might put this one on my car (along with the Colorado Native one, since CO went solidly blue, while Maine split its electoral votes, for the first time since Andrew Jackson). 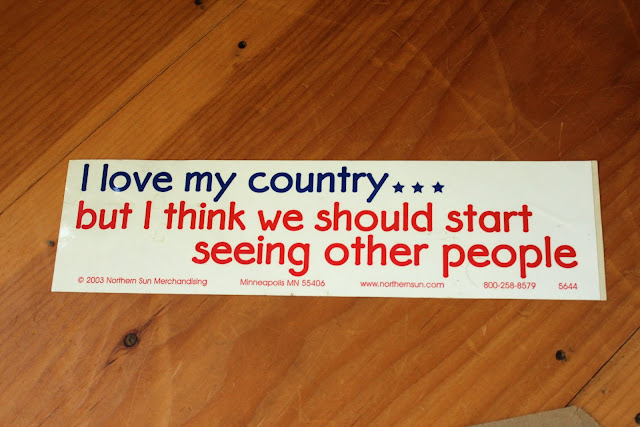 I found this button, which I think I stole from an old suitcase of my mom's about 30 years ago. It's a good thing to keep in mind—when they deny us our rights, they deny us our basic humanity. I stuck it on a jacket, along with one that says "I said anarchy, not manarchy," and a safety pin. 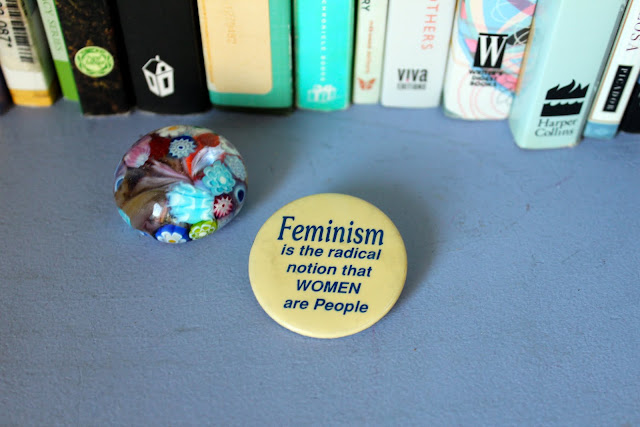 I found this little paper kite that says on the back, "Fly high! Hero Andrea!" I don't remember who gave it to me or why, but yes, as long as we're going high, we might as well fly high. 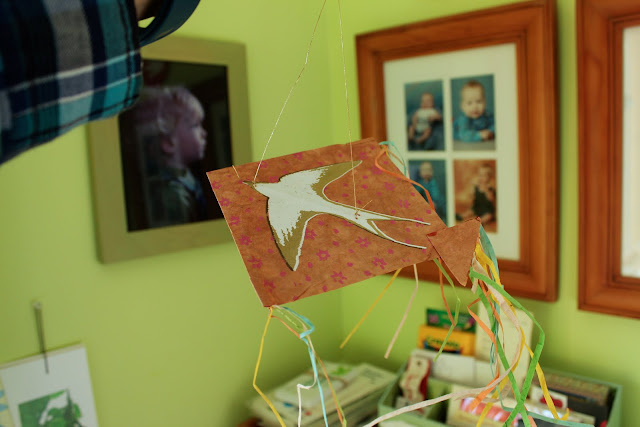 I found a drawing M made when he was four—if I was going to guess what it was about, I'd say it was Mars sending down some fiery wrath on an enemy, cause that's how M rolled back then—and some funny quotes I scrawled on a  scrap of paper:

E: It would be funny if I didn't brush the top of my head and there was a bird's nest in it.

Z: What's kosher?
M: It's where they only eat pickles.

Me: You've got bad breath. Don't you brush those things?
E: I brushed them with pig manure! 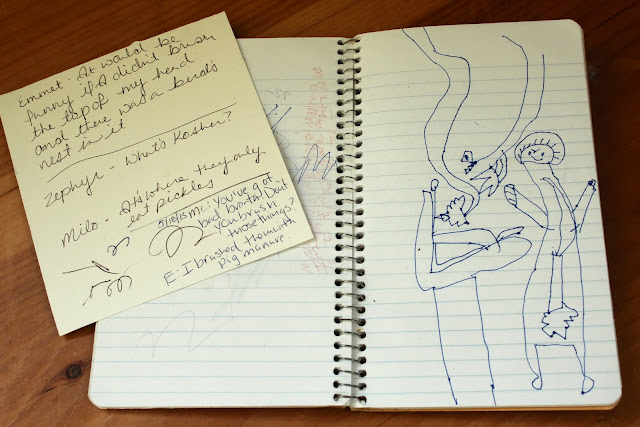 Finally, I uncovered these baby faces that had been hidden behind the bookcase part of the desk. I love those babies way too much to sit by and let their world be taken over by hatred and violence and greed. 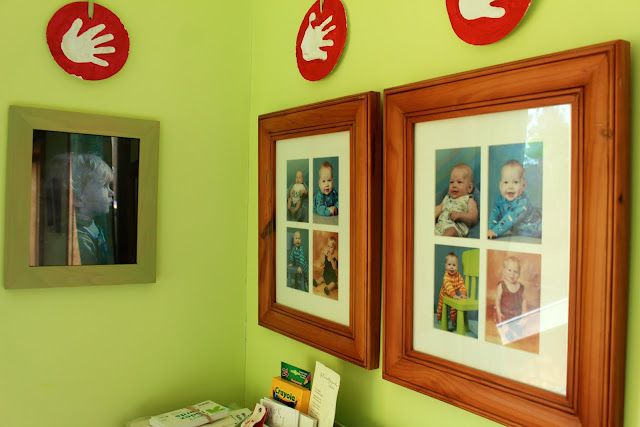 I know Molly Ivins wasn't talking about bookshelves and closets when she wrote, "Don't mourn. Organize." But moving around furniture is a healthy way to vent murderous rage. And it was a good way to keep the body moving while the mind railed and wailed and turned toward more productive thoughts. And I came to the realization that I need to focus my energies on one thing, one issue, if I'm going to be even moderately effective. There are so many things I care about in this world (that's what makes me a bleeding-heart liberal, right?), so it's hard not to want to embrace everything.

Yet I've decided that, going forward, I'm going to put my energy into fighting climate change. It will affect every single life on this planet and not much else will matter once we're warring over the last drops of clean water and humps of dry land. And environmental regulation is something I know about, having worked in the field for my whole adult life. I know what it can accomplish, given the political will, and I know what its limitations are.

Email ThisBlogThis!Share to TwitterShare to FacebookShare to Pinterest
Labels: organizing, political is personal