I've been reading Jane Smiley's 13 Ways of Looking at the Novel, a tome thick enough to boost a small child up to the Thanksgiving table, and one I've passed by at the library many a time. But something compelled me to check it out this month. Smiley, stuck in a novel-writing dead-end, decided to read 100 novels that span the breadth and depth of the history of the genre. Over the course of her reading, she gained insights into the nature of the novel—what it is, what it does, how to write one. In the most exciting chapter, Chapter 8, "The Novel and History," Smiley proposes a revolutionary idea: novels do not only reflect changes in society, but the act of reading novels actually has driven those changes. 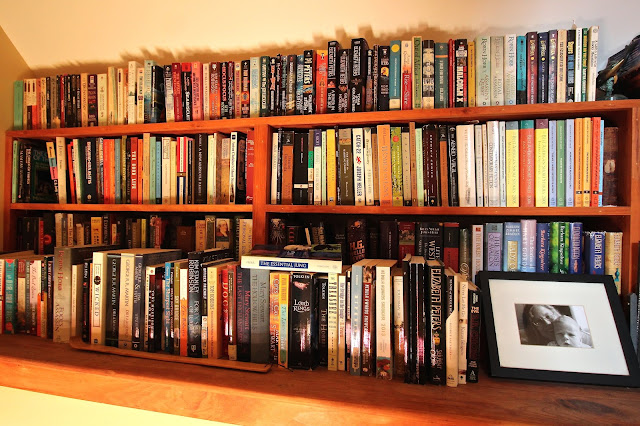 Smiley writes: "The novel has gotten us from the manners and mores of fourteenth century Florence to those of twenty-first-century California...by very modest means—not by argument, but by proposing simple, understandable choices about common dilemmas." Watching characters struggle with their choices engenders sympathy in the reader, sympathies that can be applied, by extension, to living humans in their own society. As an example of this choice-making, Smiley considers Jane Austen's Pride and Prejudice: "Page by page, choice by choice, Austen's own fine sense of discernment teaches the readers to take a view similar to hers." She goes on:


Such transformations in the way a character, or a reader, perceives herself and acts as a result of her perceptions were broadcast into society, and therefore into history, by market forces. In the same way that the popularity of the novel encouraged aspiring novelists to try different techniques in their own works, the nature of the novel as entertainment encouraged, or you might say trained, average readers to think in new ways about themselves and their circumstances. By taking up current concerns and portraying and commenting upon them, the novel made them present and important to readers who might not otherwise have had the eduction or the connections to take a larger view of their lives.

When I feel skeptical of this idea, that reading novels can truly change us, and thus our world, I think of the people I know who read widely and deeply; they are almost to a one also the most broad-thinking and compassionate people I know. And research bears this out: a study conducted a couple of years ago found that people who read literary fiction score better on tests measuring empathy, social perception, and emotional intelligence than those who read pop fiction or nonfiction.

But how does this transformation of individuals translate into a transformed society? Smiley writes:


In the course of 650 years, Boccaccio and his successors have helped to create a certain kind of world. It is a world not unlike the novel, a world that seems to many people transparent and automatic but isn't. In this world, everyone, male and female, could become, might be, his or her own protagonist—that is, could develop a rich inner life based on the competing demands of conscience and ambition, selfishness and social connection. In this world each person feels a tension between himself or herself and the group, and also wishes to learn how to negotiate that tension. In this world individual existence has the potential for meaning—it can be understood and possibly changed or at least learned from. Cause and effect can be disentangled and observed. Events don't simply follow one another, as coordinate clauses do in a medieval narrative; they shape one another and grow out of one another, as subordinate clauses do in a modern narrative. In this world the ordinary person can step back, observe both the world and himself or herself, make a judgment, and then make a choice. This world is an agglomeration of individuals who relate to others as individuals. It is a word where "point of view" is a well-developed and important concept, the Western liberal ideal, and a paradox: if you look at a novel or a democracy one way, it is the tale of one person; if you look at it another way, it is the tale of a group. Neither the person more the group gains permanent ascendancy; the two coexist.

But social change, we have learned, is not linear nor is it irreversible. Smiley adds:


After more than a hundred novels and two and a half years of history, I saw that the world I thought was established and secure, at least in the West, is more fragile than I thought, because it is newer than I realized. That a woman could be an agent rather than an object or a possession, that a marriage can be chosen, then rejected, that an identity can be constructed by an ordinary person—these are difficult ideas, strange to many, and dangerous to some. The tension between the individual and the group that the novel depicts is often intolerable to the group, and for some groups, an individual does not have a right to a point of view. The routine quality of the novel, the way that novels seem ubiquitous and benign, pleasurable, or fun, or even tedious to schoolchildren, masks their subversiveness and helps us forget how they have remade the world.

So for those of us feeling off-balance this week, stressed out, helpless, and even for those who feel satisfied, vindicated—especially for them—I offer one task to carry alongside our work of chopping wood and carrying water. In between writing letters and making phone calls, marching in the streets, and holding our children tight, we must read. Read wide and deep. Read classics and current tales. Read about those similar to us and those who are different. Read Dickens and Austen and Hardy. Read the Brontes and Eliot and James. Read Tolstoy and Dumas. Read Kate Chopin and Virginia Woolf. Read Kafka. Read Ayn Rand, if you must, but don't only read Ayn Rand. Read Harriet Beecher Stowe and Mark Twain and Harper Lee. Read Oscar Wilde and E.M. Forster. Read Charlotte Perkins Gilman and Tillie Olsen. Read Rebecca Harding Davis and Susan Glaspell.

Read some of these books and authors, below, whose characters may live lives very different from yours. Some of these I've read, some have been on my "to-read" list for a while, and most were recommended by friends. (I'm only including fiction—mostly novels and a few short story collections—in this list; of course there are tons of memoirs and nonfiction and poetry books out there that we also can read to understand more about our diverse, messy, beautiful world, but the thesis here is that reading novels actually changes that world):

Small Great Things by Jodi Picoult
Americanah by Chimamanda Adichie
If Beale Street Could Talk by James Baldwin
White Teeth by Zadie Smith
Beloved by Toni Morrison
Invisible Man by Ralph Ellison
The Color Purple by Alice Walker
Drown; Oscar Wao by Junot Diaz
What Came Before He Shot Her by Elizabeth George

Living with The Enemy by Donna Ferrato
The Beans of Egypt, Maine by Carolyn Chute
Mama Day by Gloria Naylor
Passing by Nella Larsen
Hell's Bottom, Colorado by Laura Pritchett
Interpreter of Maladies; Namesake by Jhumpa Lahiri
The White Tiger by Arvind Adiga
Caramelo by Sandra Cisneros
And the Mountains Echoed by Khaled Hosseini.
Boy, Snow, Bird by Helen Oyeyemi
For Ganesh, Remover of Obstacles by Sujoya Roy
The Known World by Edward P Jones
Kindred by Octavia Butler
The Handmaid's Tale by Margaret Atwood
How To Escape from a Leper Colony by Tiphanie Yanique
Things Fall Apart by Chinua Achebe
A Taste of Honey by Jabari Asim
Wench by Dolen Perkins-Valdez
Empire Falls by Richard Russo
Autobiography of My Mother by Jamaica Kincaid
God of Small Things by Arundhati Roy
Faith for Beginners by Aaron Hamburger
Drinking Coffee Elsewhere by ZZ Packer
The Lottery and other stories by Shirley Jackson
A Concise Chinese-English Dictionary for Lovers by Xiaolu Guo
The Translator by Leila Aboulela
Prodigal Summer by Barbara Kingsolver
The Sellout by Paul Beatty
Their Eyes Were Watching God by Zora Neale Hurston
The Lone Ranger and Tonto Fistfight in Heaven by Sherman Alexie
The Round House and Love Medicine by Louise Erdrich

Read to your children. Read them Ashley Bryan and Ezra Jack Keats. Read them Alice in Wonderland and Harry Potter and The Dark is Rising series. Read them The Little Prince and Hope for the Flowers. Read them Little House on the Prairie and The Birch Bark House. Read them Tom Sawyer and Huckleberry Finn.

Hand your teenager one of these books:

Something like Hope by Shaun Goodman
Lizzie Bright and The Buckminster Boy by Gary D. Schmidt
Shadowshaper by Daniel Jose Older
So Far From God by Ana Castillo
And the Earth Did Not Devour Him by Tomas Rivera
Willow by Tonya Cherie Hegamin
Monster by Walter Dean Myers
The Outsiders by S.E. Hinton
Tell Me Again How A Crush Should Feel by Sara Farizan
Darius and Twig by Walter Dean Myers.

Novels can, in the words of Mary Oliver, “take us out of our own existence and let us stand in the condition of another existence, another life.” (Though Oliver was talking about imagery, I believe this is what fiction does.)

Now, dear reader, what are you reading? What would you add to this list? What books have you read that challenged your assumptions about race, ethnicity, religion, gender, sexuality, history, class? Do you believe in the power of reading novels to change the world?
Posted by Andrea at 11:10 AM