And just like that, we have a quilt top. Well, not really JUST like that. It did take a couple of years, but not NEARLY as long as M's quilt took, so it felt really fast. And the actual hands-on time was quite small…there just happened to be a lot of in-between time in between the hands-on time. 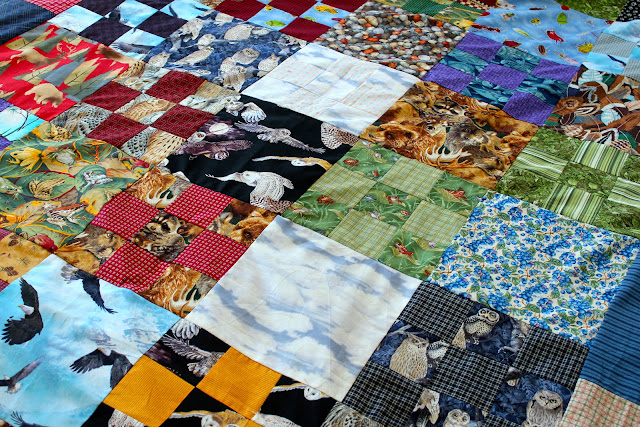 I'm calling this quilt "The Naturalist," because Z's very interested in wildlife and plants and things of that nature (well, when he's not interested in his iPad, which sucks of more and more of his time every day, I'm afraid). I already had some wildlife and nature-type prints and decided to pair them (plus a few additional purchases) with mini plaids, of which I had a ton leftover from M's baby quilt: 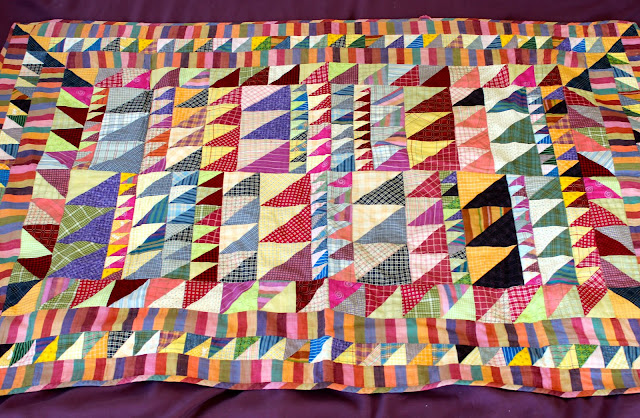 (Can you believe I made that thing when I was pregnant…so many fussy little pieces, all paper-pieced together. I don't even want to think about how much I spent on fabric, to make it look like a scrap quilt!! And I didn't even finish it until he was two and pretty much too big for it.)

My dilemma with Z's quilt: how to make a quilt using wildlife and nature prints and plaid and have it not end up looking like a huntin' camp quilt? My solution: use prints of non-edible wildlife (owls and eagles and frogs and bugs) and other natural objects (rocks and leaves and clouds and blueberries and feathers) plus some very non-huntin' camp colors (sky blue, purple, salmon, gold, bright green). 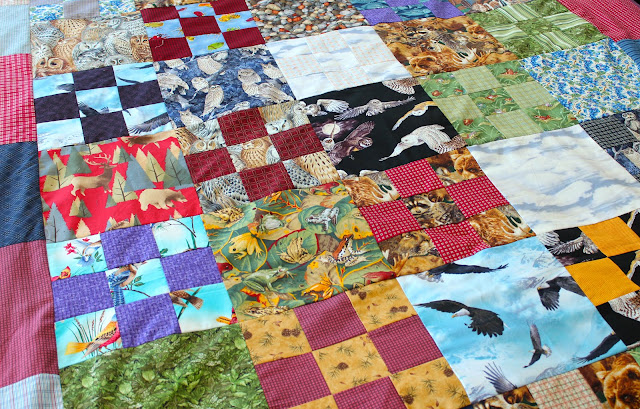 I think I succeeded; it doesn't look very huntin' camp to me. It is a little busy, though. Okay, it's extremely busy, but I think I like it that way. It may not be conducive to quiet dreams, but it provides a lot of fodder for daydreams and imagination.

I still need to get batting and backing and take it in to be quilted, which is outside my skill set for anything bigger than a baby quilt. Not sure when I'll get to that. That's one thing I do miss about my old 9-5 life, not having to think twice about spending money on something like finishing off a quilt. And now it's time to start on a quilt for E—I already have the pieces cut out (frogs and lizards and turtles and jungle birds), which is a bummer, because last night, when he saw Z's finished quilt, he said, "can you make me one with kitties and bunnies?" Hate to say "no" to a request like that from an 11-year-old boy, but I'm not starting again from scratch!
Posted by Andrea at 6:54 AM