This month I've been going for a 40-minute walk first thing each morning, to stay active as we slip into the season during which I just want to burrow into the couch with a stack of books, a bottomless chai, and a basket of yarn and hibernate. To ensure that my brain swithces into "exercise" mode and not "wander slowly looking at birds and trees" mode, I dress the part: leggings of some sort of sporty material, sneakers, and a shirt beneath my layers of jackets that is designated an exercise shirt. This uniform worked pretty well, comfort-wise, until last week, when the weather got a little chillier and I found myself wishing for just a little more warmth around the middle and decided I should make myself a fleece skirt. 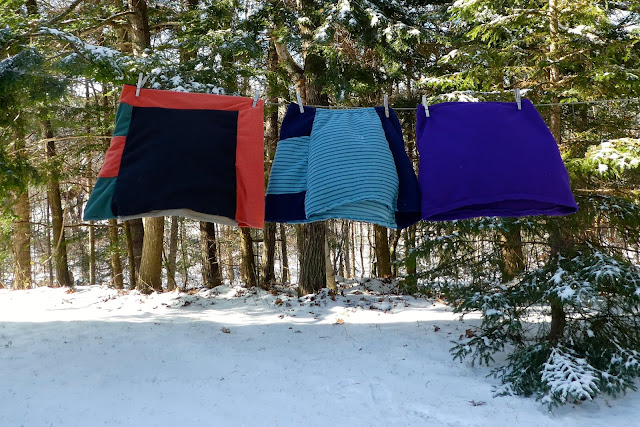 I have a large bin of fleece, much of it purchased at the Malden Mills (inventor of Polartec) factory store in Massachusetts many years ago, before I had kids and before they (Malden Mills, not my kids) went bankrupt. When I opened the bin up I was so excited by the selection I couldn't stop at one skirt and instead made three. 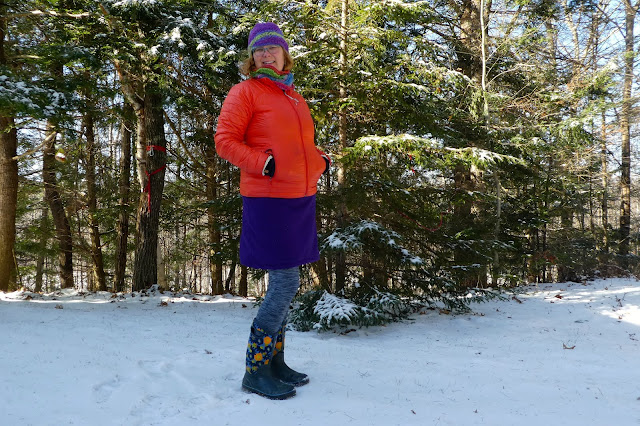 I started with the purple one, for which I used this pattern. It was very easy to follow, though I will say I didn't do quite as neat a job as she did (I'll blame my lack of serger). I also tried an experiment of using fold-over elastic as sew-down elastic in the waistband, but it didn't quite work out and the waist is a little loose. 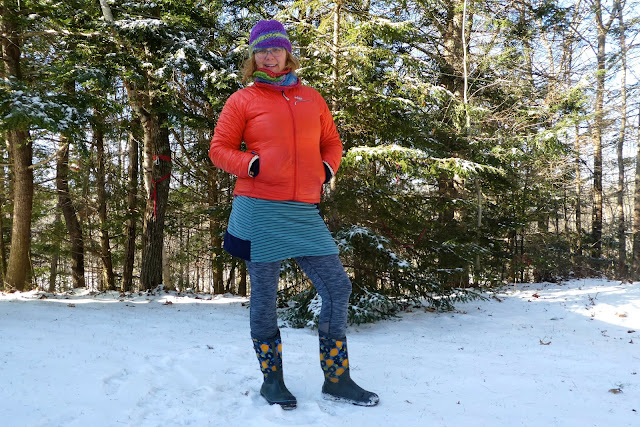 For the next one, I used my very favorite blue-and-blue striped fleece, which I made into these pants for E and Z when they were three. Man, they wore those things till they were at least six. They're probably the reason E will only wear soft fabrics and elastic waistbands to this day. I also made E and Z beanies out of the same fabric for the Colorado Trail. I'd already gotten a lot of mileage out of that little remnant of fabric (two, three yards, maybe), and there wasn't quite enough left for a whole skirt, so I copied the four-panel skirt design from this picture, with a stripey pocket on one side, and I must say it's quite jaunty. 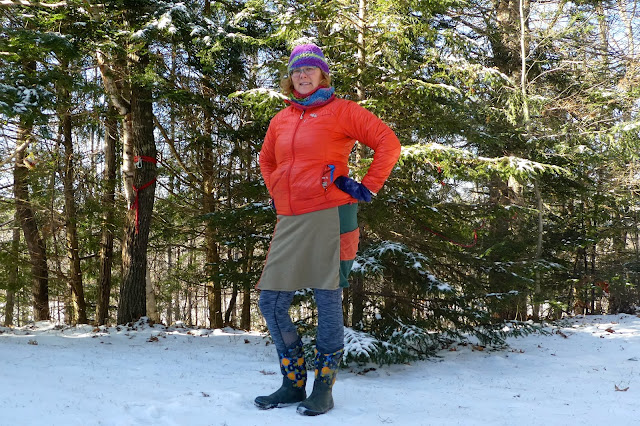 Finally, I wanted to try a yoga waistband style, and used a skirt I already own as a guide in making that pattern. I used scraps of four different fabrics—black, tan, green, and melon (or coral?), all of which were too small for a whole skirt. After some seam-ripping caused because I doubted my original pattern calculations and added an extra inch to the black panel, it all came together just fine, super cute, and maybe a mite snug.

Of course, the day after I made the skirts, it snowed, then the temperature dropped and the wind picked up. I powered through with the leggings-and-skirt combo and switched my walk to the afternoon on the two days the temps were in the teens, but it was not quite warm enough with the wind blowing.  I’m either going to have to make a longer skirt for really cold  days or switch to snow pants.