Ten years ago, I knitted myself a Noro Spiral One-Skein Hat. Up to that point, I had been knitting for more than a dozen years, but had averaged only one project per year. That hat was the turning point, when I realied I needed to either knit or get off the pot. It was also the first project for which I remembered how to cast on without help and where I learned about stitch markers and yarn-overs. It was also a really great hat—all my favorite colors, and it fit really well, and I always got compliments on it wherever I went.

Then sometime between last hat season and this, it disappeared. I don't remember seeing it when I cleaned the mudroom over the summer (I don't remember not seeing it, either), and since then I've cleaned the entire house, top to almost bottom, so unless it's lurking in the basement somewhere, it's gone. I suspect that it got jealous of this hat, with which it had to share my head last winter, and went off to find a new home. It should have known I always have room on my head, and in my heart, for another hat.

When it became clear the hat wasn't coming back, I picked up a skein of yarn and made a new one. 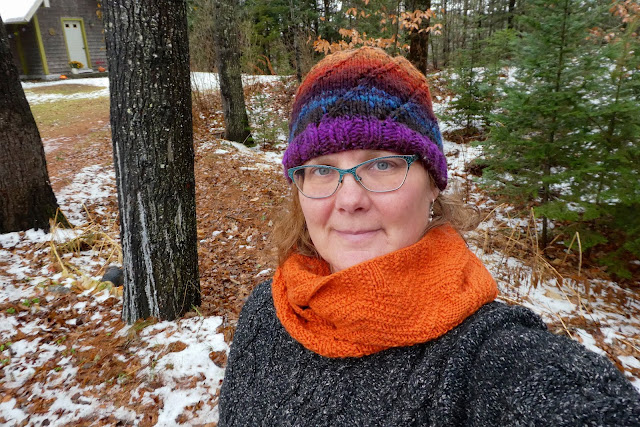 I normally wouldn't choose such dark, or such neutral, colors, but I had a hankering for an autumnal-hued head-warmer, in part to go with my bright orange fall jacket, and this skein of yarn called out to me the moment I walked into the yarn store—I liked the sunset/night sky/autumn leaves feel of it. This hat knit up a lot faster than the last one, with ten more years' knitting experience (at an average of six projects per year, I'm happy to report) under my belt. I don't love it quite as much as I loved the lost one, and I wish I'd started the decreases two rounds earlier, but it's a pretty good hat, and I think it will grow on me.

Ravelry notes, such as they are, are here.
Posted by Andrea at 7:32 AM