While we're all chewing off our nails waiting to find out whether we'll be saved from full-on fascism by a tiny thread, I thought I'd lighten the mood, or at least change the subject, with a rundown of last month's reads. 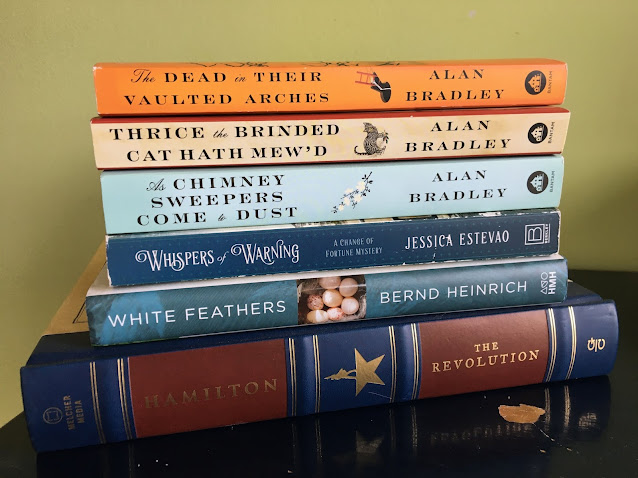 October for me involved an inordinate amount of adulting. There was the sending for, filling out, returning, and making sure it arrived-ing of my absentee ballot. There was used-car-shopping and convincing C that we really do need to get another car, not only to make his 65-mile-a-day commute more gas efficient but also to save me from having to drive the hugest, most gas-hogging, impractical truck in the world. There was FAFSA-filling-out. There was a contract to decipher and negotiate. (A good contract, one I hope to tell you about very soon, but a contract no less.) So my reading list consisted mainly of escapism. I also continued to watch way too much TV, finishing up New Girl and starting in on The Gilmore Girls (apparently all the shows I watch have to have "girl" in the title--a side-effect of living in a house of men). Expect that bingeing trend to continue at least through the vote-counting.
Anyhoo, on to the books. I'd been watching Z devour volume after volume of a series he loves and has read at least once or twice before and I felt a little envious. Other than Amelia Peabody, I haven't gotten into that many book series, but that urge to plow that finish one book and dive into the next experience looked really appealing. Then I remembered the Flavia de Luce books by Alan Bradley that I'd started in April and stopped mid-series in May, and went to the bookstore to pick up the next three: The Dead in Their Vaulted Arches, Thrice the Brindled Cat Hath Mew'd, and As Chimney Sweepers Come to Dust. True, they get a teensy bit off the rails with the introduction of a spy element, but still I find Flavia a complete delight and the books endlessly entertaining. I've got the next two in my stack for November. If you like a good mystery, if you like a smart and spunky narrator, if you like a bit of English countryside, you'll love this series.
My mom sent me Whispers of Warning, the second in the Change of Fortune series by Jessica Estevao, the first of which I'd picked up at a conference last summer. Another mystery, this series is about a young woman in the early 1900s who has escaped a checkered past and been welcomed into the fold of her mother's sister, who runs a hotel in Old Orchard Beach, Maine, that caters to spiritualist interests. The narrator, Ruby, reads cards and hears a voice that warns and guides her, and she uses this psychic ability to help solve a murder and avoid being exposed. If you like historical fiction, especially with a bent on women's history, a hint of the supernatural, and strong women characters, you'll enjoy this series.
In the nonfiction department, I read White Feathers by Bernd Heinrich, about the nesting behavior of tree swallows. This is pretty much straight up natural history, with a little hint at the author's life and his humor thrown in. We have swallows that nest in boxes near our house, so it was fascinating to learn more about their behavior. If you're interested in birds and the scientific process, this one's for you.
Finally, I read Hamilton: The Revolution by Lin Manuel Miranda and Jeremy McCarter. You already know about my Hamilton obsession, and you can read my mini review of the book here. So all I'll say here is, get yourself a subscription to Disney+ and watch the show if you haven't already, and then watch it again and read this book. It's your civics assignment now that the other important civic duty of this month is done.
What have you been reading?
Posted by Andrea at 8:24 AM