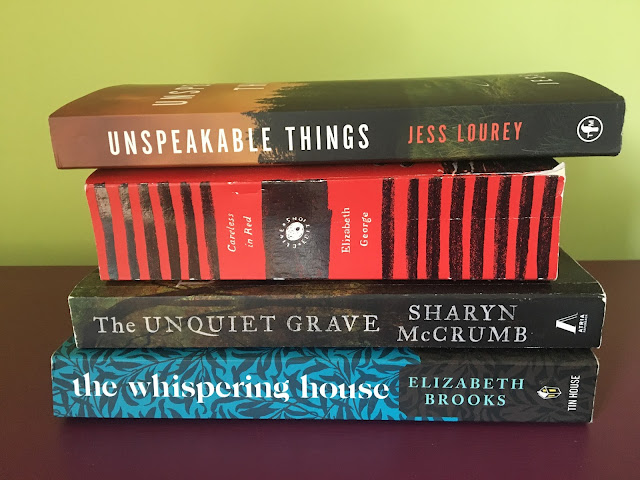 The theme for June's reading was mystery and suspense, mostly because I wanted something scary to read in the tent when we went camping over Memorial Day weekend, so I bought the bottom three books in the photo. I don't know why I thought I'd have time to read three books. As it turned out, I only read a couple of pages of two of them. It also turned out that none of them was all that scary, but they were good.
The Whispering House, by Elizabeth Brooks, is a modern gothic with innocent heroine, big scary house, mysterious male. Even though it wasn't that scary, it had a nice amount of suspense. I have to admit to being a little bothered by the bad boyfriend element to the suspense, but I suppose that's what Heathcliff and Mr. Rochester were as well, and maybe Max de Winter also, so I guess it's part of the Gothic tradition.
The Unquiet Grave, by Sharyn McCrumb, a fictionalization of a historic murder of a young woman. I used to read a lot of Sharyn McCrumb, but it's been a while, and I forgot what a master storyteller she is. She weaves history and local color into a fascinating tale.
Careless in Red, by Elizabeth George, picks up after Inspector Linley's wife is killed and he goes on a long hike on the Cornish coast to try to numb his pain. Despite the lurid red cover, this one wasn't too scary, either, and there wasn't much about the hike (I was really hoping for a tent-based nail-biter to read while in the tent). But Elizabeth George is also a brilliant story teller, so it was a page-turner even without the chills. I'm discovering that I'm not a huge fan of the multiple-point-of-view novel, but this one is very well done, with each character drawn uniquely and with a distinct narrative voice, so that it's not confusing about who is who and why they're in the story--you just trust that their purpose will become clear in time.
Unspeakable Things, by Jess Lourey, I ordered after a crime conference I "attended" remotely, Lourey being one of the presenters. In it the young narrator tries to solve the mystery of who is kidnapping and molesting boys in her neighborhood while also living in fear of being hurt herself. It was good and suspenseful if not downright creepy.

Not one of these books counts toward diminishing my book stack, since I purchased them all, my resolution to buy no fiction this year having flown completely out the window.

P.S. If you're wondering what's going on with my book, I'll be sending out an update in my newsletter this Friday. To be one of the first in the know, sign up here.