As the leaves begin to change color, each tree on its own schedule and in its own bright hue, the forest separates out from undifferentiated mass of green to individualized trees. The shape and appearance of each leaf becomes more obvious and easier to pick out than in summer. But still leaves can be confusing--once you've sorted out the oaks and maples, there are many leaves with similar characteristics left. I set out this fall to sort out once and for the various vaguely oblong leaves with toothed margins. 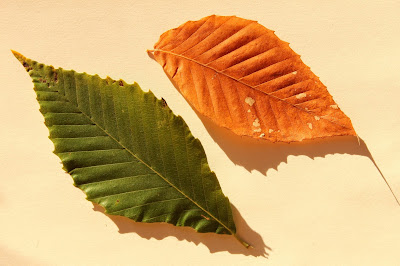 The most common (around here) of the trees with this sort of leaf is the American beech (Fagus grandifolia). Beech leaves are smooth and shiny, with single-toothed serrations, and nice deep, wide, parallel veins. Size is not a great identifier, since leaves can vary in size between individuals and on the same tree, but beech leaves are in general fairly large (3-5 inches long, and often longer than that on smaller trees). Beech trees, particularly the smaller ones, often hang onto their dried leaves through the winter, a habit known as marcescence that makes these trees easy to identify after most of their neighbors have shed their foliage. 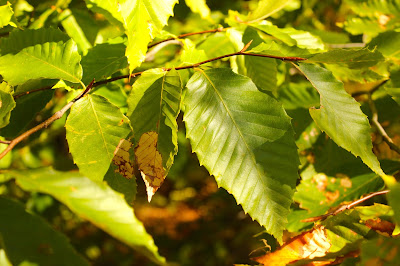 Beech tree bark is smooth and gray, though older, larger trees often have the blistered look caused by beech bark disease (we only have smaller specimens on our land, and no obvious bark disease, yet). 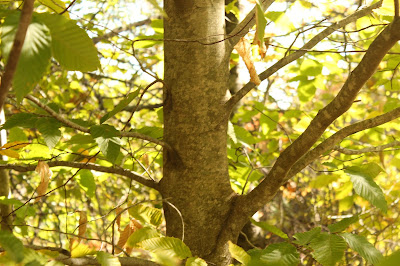 While I've been familiar with beech for a long time, the next two trees have been giving me fits, not only because of their similar leaves, but also their similar names. 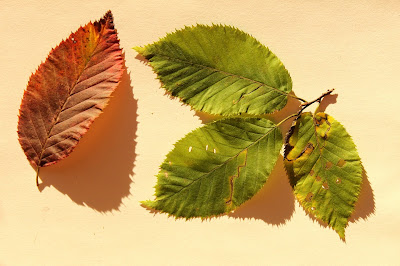 The American hornbeam (Caprinus caroliana), also known as blue beech, has leaves similar to the beech, but they're overall smaller than beech leaves and are doubly serrated. 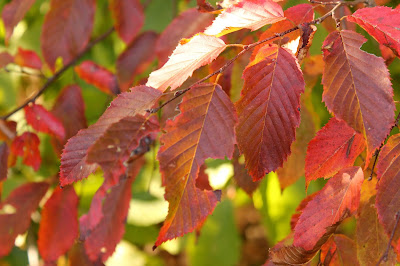 American hornbeam is also known as musclewood, because the fluted shape of the trunk and limbs gives it the appearance of muscles rippling beneath the smooth, gray bark. Because of this distinctive shape, I find hornbeam easiest to identify in winter, when all those distracting leaves are gone, although I have seen some specimens with marcescent leaves. 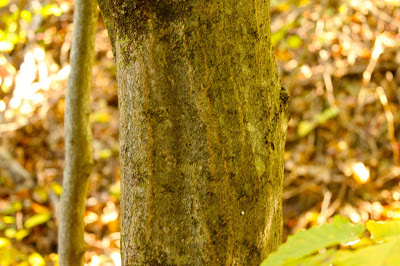 The trouble with identifying trees by their leaves is finding an individual with leaves low enough for you to reach. I knew we had tons of the next tree growing on our land, but finding a one was tricky, especially with shrubs growing everywhere that might or might not have been younger specimens of this tree (I have not yet begun to delve in the world of shrubs). 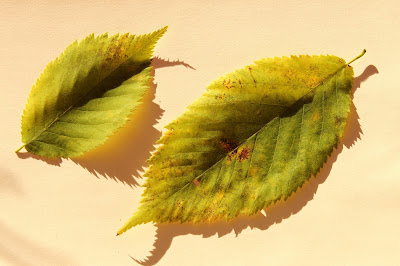 I can empathize with the botanists' aversion to common names when it comes to the previous tree and this one, Eastern hophornbeam (Ostrya virginiana). Why, oh, why make it so confusing? The "hop" part of the name comes from the fruit, which is roughly shaped like a hops flower, but why the "hornbeam" part? The leaves are similar, with multiple serrations, but hophornbeam's leaves have a faintly hairy surface and a thin, tissue-like texture. 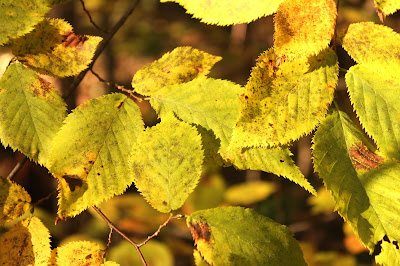 The tree itself looks nothing like hornbeam, with bark that is broken in long, thin vertical scales. This isn't a good example, because it's a young tree, but you can see already there's nothing muscle-like about it. Hophornbeam is also called ironwood because of the strength of its close-grained wood. Hornbeam, hophornbeam; musclewood, ironwood. That's just cruel. 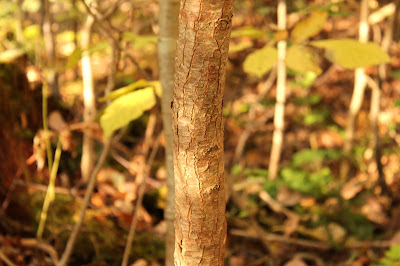 In my quest to find hophornbeam, I found quite a lot of trees with leaves like these: 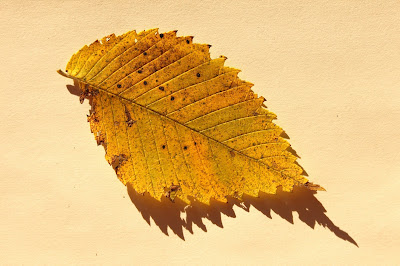 American elm (Ulmus americana), has leaves similar to the hophornbeam, but they're wider and with larger and fewer teeth. The top surface also feels like a cat's tongue. 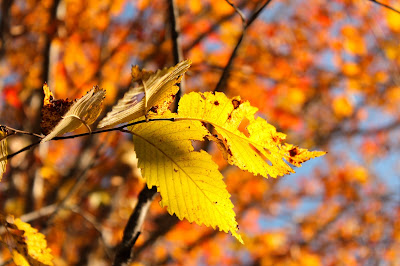 I can only describe elm bark as "messy," with long, narrow ridges that overlap and entangle. In pictures of bark of larger trees, it doesn't look nearly so tangley, but we don't have very large specimens on our property. 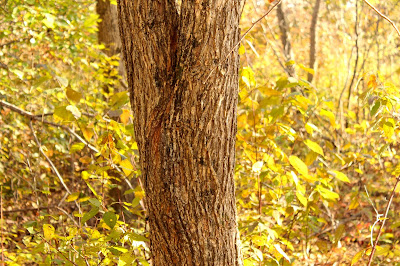 Whew! Well, it feels good to get that all sorted out. As always, when I become more intimately familiar with an element of our natural world, I see more of it; I can now walk through the woods and name each of these trees by gestalt, without plucking off their leaves and studying their twigs and bark. I know I've got a weird idea of fun, but I enjoy that interface very much.

What's wild in your neck of the woods?
Posted by Andrea at 5:00 PM