I feel better when I create something tangible with my hands—something that doesn't need to be made again (and again and again), like dinner. I've known this about myself for a long time, but I don't always remember it when I need to. Fortunately, sometimes my unconscious mind steps in, as it did earlier this week, when I sat down to make some face masks and instead put on my own oxygen mask and picked up a stack of fabric that had been waiting in the queue for me to get around to making it into a table runner. 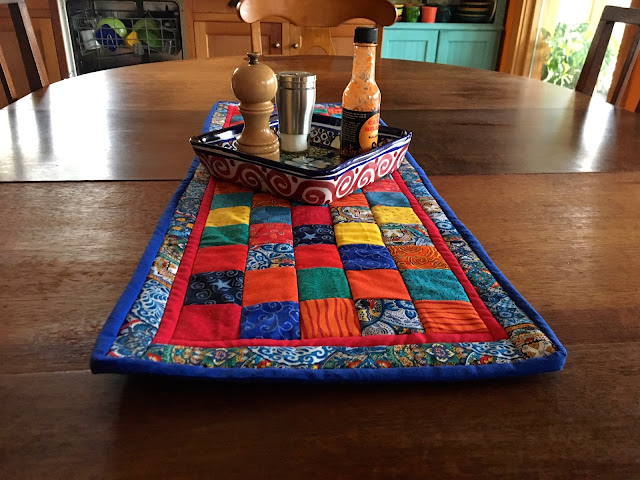 Now I don't need another table runner. Nobody needs a table runner.  But making something pretty, that is something I needed. And I'd had this idea of putting some scraps of red, blue, yellow, and turquoise together with a half-yard printed with talavera plate designs to go with a Mexican pottery dish I bought at the thrift store in the Before Times. (The talavera fabric I'd bought a few years ago, intending to replace the valance in my kitchen but was vetoed by my friends who like the dish towel curtain just fine.) So I cut strips and sewed them together and cut those into strips, which I tacked together to make longer strips (hoping to save myself a little bit of the tedium of assembling tiny squares individually). Then I sewed it all together directly onto the batting and backing, so I wouldn't have to quilt it later. 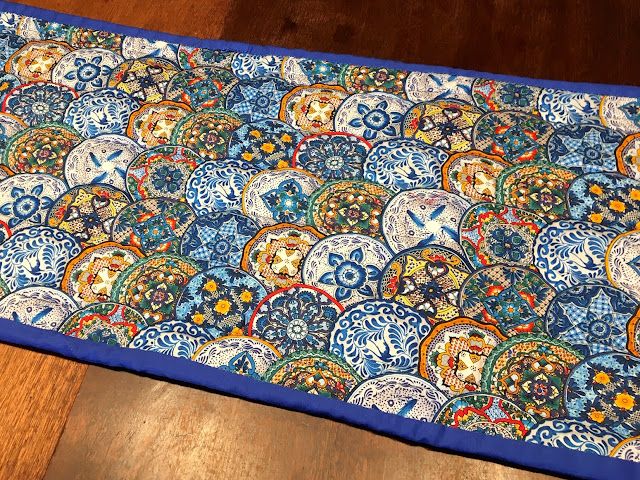 It came out a little wonky, the corners not exaclty square, but it would have come out that way even if I'd cut out indifidual squares. I'm just a wonky quilter. I ran out of blue thread most of the way through and switched to white, then I whip-stitched the binding on with teal. I always wondered how much thread Ma Ingalls brought along in the wagon in Little House on the Prairie. It must have been miles and miles, because what would she do if she ran out, there in Kansas Territory with no stores anywhere and every stitch of clothing needing to be made by her own hand? I wish that when everyone was out panic buying toilet paper I'd panic bought a few spools of thread. By the time this is all over, I'll have used it all up, right down to the lavender. 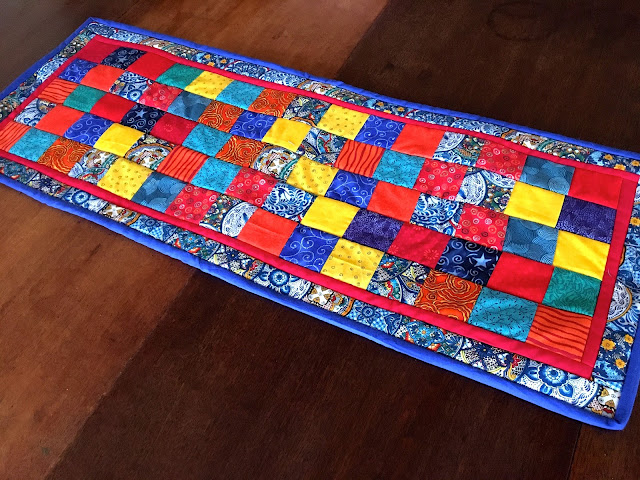 There it is, just a table runner, one which will be made dirty by my husband and children, then  unceremonously shoved aside when they need the table space for something else. It hasn't changed the world, nor will it. But it made a gray day a little brighter, and that's something.
Posted by Andrea at 11:31 AM