My 2020 book challenge—to read 50 books from the stack* by my bed (and other unread volumes already in the house). Previous months here: January, February, March, April. 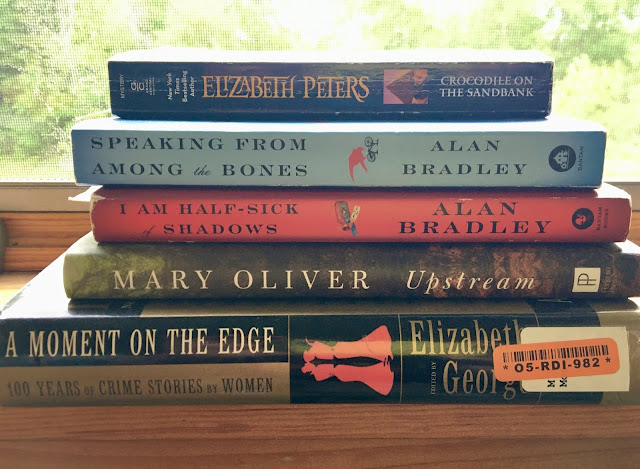 It's almost time to share this month's book stack and I'm just getting around to last month's. Where has the time gone? I don't know…I guess I've been in more of a contemplative, burrowing kind of place than a sharing kind of place, what with one thing and another. I should probably share C's book stack instead of mine—he spent the spring reading books about the civil rights movement (even before it was the it thing to do), while I've been pretty much in full-on escapism mode. I did order a few books of nature writing by Black authors because I realized that was a big gap in my huge pile of nature writing to read (and a big gap in the genre in general). So stay tuned for that. In the meantime, here's what I read in May:

Crocodile on the Sandbank, by Elizabeth Peters. When everyone got sent home for the pandemic, I started reading a P.G. Wodehouse book to the boys, but E quickly lost interest and then M went to work and wasn't around most of the read-aloud time (afternoons for me), so Z got me to read him the first in the Amelia Peabody series to him (we'd skipped this one when we started the series, because I thought they'd prefer to hear about young Ramses's adventures). We've since started the second book (which we listened to on audio during our long road trip three years ago), but once school ended and he didn't need me reading to him as a way of getting out of doing school work, our progress slowed down quite a bit.

Speaking from Among the Bones and I Am Half Sick of Shadows by Alan Bradley. These are the last two on the Flavia de Luce books that we own. I thought I might have had my fill after I finished these, but a big bombshell was dropped at the end of the last one, so I'm sure I'll pick up the next couple soon.

A Moment on the Edge, edited by Elizabeth George. I picked up a couple of writing craft books by Elizabeth George, whose mysteries I have enjoyed in the past (and whose book What Came before He Shot Her is one of the best books I've ever read), and I saw that she'd edited this book of short crime stories by women writers. Most of these were great, with a huge range of styles.

Upstream by Mary Oliver. Uncharacteristically this was my only nonfiction read for the month (told you I was all about escapism). I have a weird habit of starting to read a book when I first get it, then setting it aside (because I'm usually already in the middle of three other books) and not picking it up again for a long, long while. That happened with this one, but it turned out to be just the right book at the right time—Mary Oliver's quiet contemplations about writing, nature, and life, just when I needed them.

* The Mary Oliver is the only one of these that counts as a book stack book—the Elizabeth Peters I've already read before (many times), the Aland Bradleys belong to M, and the Elizabeth George I ordered to read.

What have you been reading?
Posted by Andrea at 7:24 AM