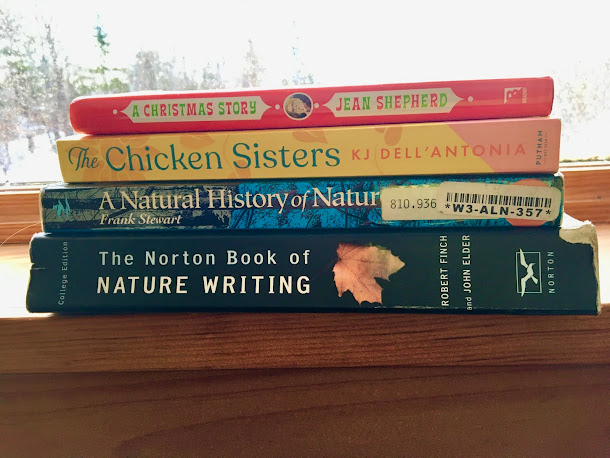 December was a bit of a slow reading month, like November, and not for any *good* reason, like my hands being busy making a lot of holiday gifts, because this year I made nothing. Rather it was a combination of returning to work and watching way too much television. But I've made some changes that I hope will make it easier to incorporate reading into my life more regularly in 2021.

I finally finished reading The Norton Book of Nature Writing, College Edition, edited by Robert Finch and John Elder, which took me at least all year (I wish I'd noted when I began reading). It doesn't look that thick, but it has onion-skin pages and clocks in at 1,135 pages before the permissions section. Most traditional nature writing anthologies include a whole bunch of white dudes plus Rachel Carson. With this one, you can tell that the editors went to some pains to include more women and some more diverse voices, and these appear more toward the back of the book, among the more recent selections. But still, there's a whole lotta old white dudes represented. Nevertheless, it's an excellent survey of the genre, and it introduced me to several authors whose books I have acquired and read or plan to read soon.

As a companion, I read A Natural History of Nature Writing by Frank Stewart, which is a book that shows how American nature writing evolved since the time of Thoreau, and how Thoreau influenced some of the more influential writers of the 20th century (Aldo Leopold, Ed Abbey, Rachel Carson, Bill McKibben; in other words, a bunch of white dudes plus Rachel Carson). Unfortunately, I spread the reading of it out to coincide with reading the excerpts by the relevant authors in Norton, which means I didn't really take in the author's thesis as well as I might if I'd read it straight through. It's one I might revisit later, as I continue to hone my understanding of and approach to nature writing.

I listen to the #AmWriting podcast pretty religiously, so I heard a lot about the development, delay, and eventual release of The Chicken Sisters by KJ Dell'Antonia, so of course I had to read it. It's the entertaining story of a decades'-old family feud, conflict between a pair of modern-day sisters, and a reality TV show. Oh, yeah, and fried chicken. If you're looking for something fun and lively to read to escape from the insane moment we find ourselves in right now, check this one out.

Finally, I read The Christmas Story by Jean Shepherd, which is a collection of the essays/short stories (they seem to blur across the line) on which the movie was based. We were late comers to the movie, which my sister sent us a half-dozen Christmases ago or so, but it's since become one of our favorites. I think it gets more amusing every time I watch it, and the grinchy teenagers even seem to enjoy it still. I thought I'd never read it before, but now I see I read it in 2018, which is really strange, because none of it seemed familiar to me, except the parts that show up in the movie. If my book memory starts to go, I'm going to be really upset. In any case, it was a fun, fast read, and Shepherd's humor style is super engaging and fresh, even though the essays were originally published decades ago (and the events took place in the 30s).