We moved into our house just a little over 14 years ago. It wasn't quite done when we moved in—there was no bathtub (and poor one-and-a-half-year-old M had to take his baths in the tiny Elmo tub of his infancy), there was no kitchen sink (we did dishes in the bathroom for a period of time there). There were no doors on the kitchen cabinets. I think there was no siding. But over time, bit by bit, C finished up most of the major details.

The minor details? Those have necessitated a bit more nudging on my part. I did a major kitchen overhaul several years ago, although this involved more reorganizing and furniture-finishing by me than carpentry by C (though there was a bit of that) and then last year, around this time, C added a decorative shelf along the base of the cabinets, above the backsplash. 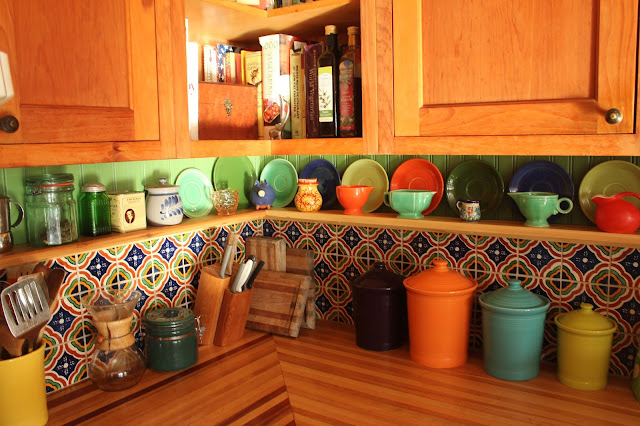 That almost finished off the kitchen. There was just the tiny detail of a gap between the tile over the stove and the stove hood (caused by Mr. Energy changing stove hoods after a few years to a more powerful, but also lower-profile model which left an expanse of yellow paint hanging in the air). 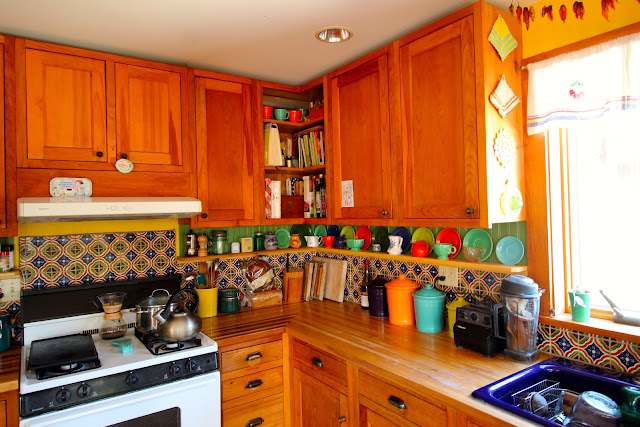 At first I wanted him to chip out the top row of partial tiles and fill in the space with whole tiles (we have plenty of extra), but I soon realized that would never happened, and I'd be stuck with the greasy, food-splattered yellow paint (for some reason we used matte paint in the kitchen, which is impossible to clean) forever. So I *let* him trim it out with wood, on which I hung three cute hooks and three festive potholders (purely decorative). It was a good compromise, I think. 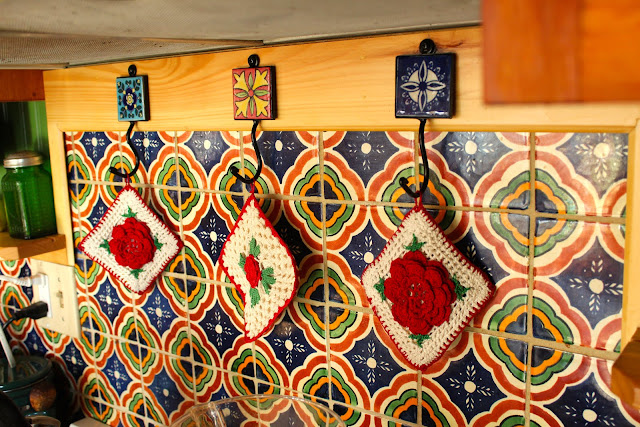 The other small detail in the kitchen that had been annoying me all these years was that he never finished off the end of the upper cabinets. It was just ugly wood with screws in it. I had C add a piece of plywood to cover up the mess and I decorated it with more seasonally appropriate potholders (I ordered them all as a set on Easy) and a clay sun M made in art class some years ago. This is a spot no one is likely to notices, situated as it is in a narrow hallway on the way to the fridge and the bathroom, but I notice it and now it makes me much nappier than it did! 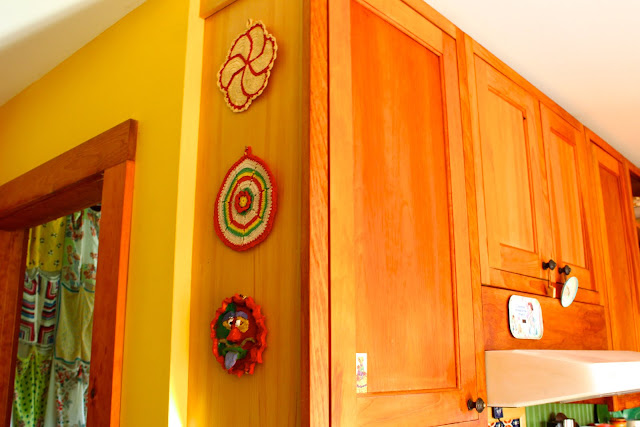 There are still a few very tiny unfinished details in the kitchen—pieces of trim here and there in places that don't even bother me and it would be nice to have crown molding, for no other reason that to stop dust from accumulating on top of the cabinets—but for now it's done enough.
Posted by Andrea at 7:07 AM